First things first, Pranksters – allow me to answer the two most burningest questions on your mind:

Yes, I did get a job, but I have yet to find myself craving Mr. Rogers sweaters or penny loafers, nor have I decided that a “five year plan” is worth my brain power, so it’s safe to say that I still haven’t grown up. More on that another time when I have more than two misfiring synapses to work with.

No, I have not gotten less annoying. Sorry. Thems be the breaks, I guess.

I was probably five or six the first time my mother threatened me: “Rebecca,” she said sternly after I’d chosen to repaint her dull white walls with some beautiful markers and my most prized stickers. I’d thought that a picture of my unicorn, Mr. Snuffles was a fabulous addition to our dining room, but she, apparently felt otherwise, because she finished the lecture by throwing up her hands and yelling, exasperated, “someday, you’re going to grow up and have a child just like you.”

She said it ominously enough that I paid attention until I realized what she was saying.

She just stared at me, until she huffed off to her room to center herself by playing some depressing music. Turns out? She was right.

This weekend, I spent a good deal of my time doing the second, and most important part of any move.

(I know, I know, I’ve lived here since October, but trust me when I say that when it comes to funk, I am a junkie. Also: horrifyingly depressed)

I began to unpack the items I’d stowed in cupboards and closets when I was in the frantic, “OMG UNPACK, UNPACK! THE SPANISH ARE COMING!” stage of the move. Once everything was assembled and the resident OCD apartment owner a couple of buildings over had suitably drilled the whole, “do not recycle big boxes” thing into my head, I sat down. I didn’t really get up again for four months.

For those four months, I was The Ghost of Apartment 6B, shutting my blinds, and staring off into space. I’d shuffle to the computer to occasionally peck out a post and apply for some jobs when I wasn’t feeling suicidal, then shuffle back to the couch and pretend this was all a bad dream.

It, as I don’t have to point out to you, Pranksters, wasn’t.

So this weekend, I got off my ass and got to work whipping my house into the approximate shape of a home, which meant that I spent a great deal of time wondering why on earth I’d packed this or that, puzzling over the reasons the cupboards could possibly be sticky, and trying to turn my life into, well, a life worth living. I’m not stupid enough to say “the dark days are over,” quite yet, but I know I’ve turned some sort of corner, and for that, I’m grateful.

My daughter wandered into the Batcave while I was organizing some of my jewelry. It was time to go through a massive purge, and I’d figured that there was no time like the present to do so.

“Oooooooh!” she squealed loudly as she saw all the “pretties” I’d pulled out of one of my jewelry boxes. “That’s so BEAUTIFUL, Mama!” Her rapture was unlike anything I’d seen, unless I’d been looking in the mirror after a particularly wonderful sale.

I took a break from untangling a knot that was probably tied by a roving gang of sailors while I was sleeping and sat back and watched my daughter marvel at the pretties with me. Her unbridled joy made my heart grow about twenty sizes.

“Mimi,” I said. “Would you like your own jewelry box to put your jewelry in?”

“Oh MAMA,” she breathed in deeply. “That would be beautiful. How about I take this one?”

I laughed – that one was my favorite too.

“How about we find you your own jewelry box? You can store your pretties in here until I find you one, okay?”

She grinned, ear to ear, and then wrapped me in her spindly arms.

I beamed into her hair, feeling, for the first time in a long time, that same unbridled sense of joy that was oozing from her pores. This was truly one of the happiest moments of my life.

“Do you like the pretty picture of kittens I drew on your wall?” she asked daintily. “I used PINK! My favorite color! And Hello Kitty stickers!”

“Let’s take a look at it, Mimi!” I suggested, my legs creaking and groaning as I got up off the floor, still smiling.

A child after my own likeness, indeed. 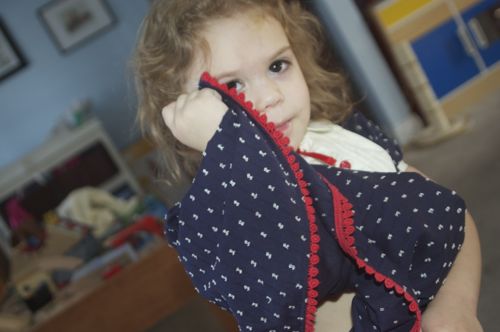 Now, if you’ll excuse me, Pranksters, I’m off to find some costume jewelry to fill up my daughter’s new jewelry box.

14 thoughts on “Somehow, I Don’t Think This Is What My Mother Meant”