If I were a smart person, I would not have used my real name on the internet.

If I were a smart person, I would not solve problems by shrugging my shoulders and saying, “eh, I’ll figure something out,” then eating an Uncrustables.

If I were a smart person, I would have a greater five year plan than, “don’t die.”

If I were a smart person, I would actually sell the things I find in my closet, rather than donating them to charity.

Smart has the plans. Stupid has the stories.

Since I’ve been undergoing the great Purge Fest of 2010, I’ve been shocked by the amount of shit that I’ve managed to collect. I don’t like excess crap because it makes me unhappy, sort of how I feel when I’m chased by a flock of geese or if I have someone gleefully point out that I have misused a word somewhere in my blog (a-ha! She has made an ERROR! Let us POINT IT OUT TO HER!).

I’m in the process of moving my computer area upstairs so that I may watch my singing warthog videos in peace and possibly find a way to start a “career” or something (ed note: WHATEVER). Moreover, I want a space that is my own since my crotch parasites have taken over everything else.

Even though I cleaned out my closet a couple of months ago, I decided that it was high time to do it again. Especially since I finally went and bought new beside tables, lamps AND A DESK. I’ve never actually owned a desk before. Now I can properly watch my dancing dog videos on this: 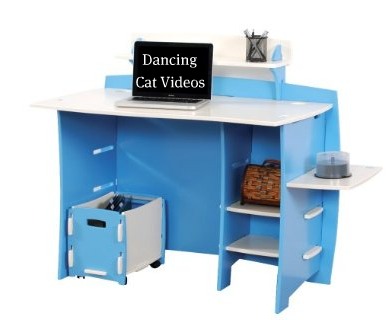 You’re overwhelmed by awesomeness, I know.

Anyway, my tastes are delightful, I can tell that’s what you’re thinking. You’re not thinking, “who gave that girl a credit card because she has tastes like an overgrown monkey?” because THAT would be a cold prickly, NOT a warm fuzzy, Pranksters.

That means, though, that I had a lot of clothes that needed removal. I’d thought about keeping them for when I have my Love Child, but I realize that by that time, I’ll want new clothes anyway.

I was hoping that I’d find my missing whore pants, now MIA since July, when I went through my closet, but no such luck. Those whore pants are gone baby, gone.

Whenever I do a gigantic purge, there’s a tiny part of me that wishes that I wasn’t afraid of eBay. I might make a couple of bucks selling my old crap if I wasn’t such a pussbag. Charity, I remind myself, is good.

My closet seems to reward this.

The last time that I did a purge I found, I shit you not, a small bag of diamonds. They were, of course, my own diamonds, but still, diamonds. I also found a pair of patent leather Mary Janes that I’d forgotten that I’d bought.

This time, however, as I approached my closet ready to do battle, I was expecting a bag of poo. Certainly, lightening doesn’t strike twice and frankly, with the week I’ve been having, poo would probably be more than I deserved.

Instead, I found more diamonds. A pair of earrings. Certainly more useful than a bag of loose diamonds.

Then, I found this: 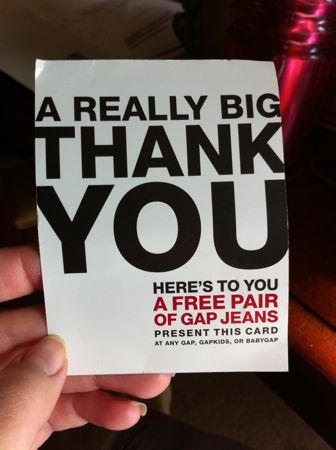 A coupon for a free pair of new Whore Pants.

Guess I have a Closet Fairy.

Wonder if I can ask it for a smaller ass.

89 thoughts on “Smart Has The Plans, Stupid Has The Magic Closet”