Wait, they don’t tattoo BABIES, do they?

I’d spent years lusting after a sleeve (read: a tattoo that goes on your upper arm)(I felt it necessary to define it because, well, um, if I told you I’d been lusting after a sleeve, that would make it sound as though I lacked shirts with sleeves, and as a resident of Chicago, where winter is affectionately called, “ass cold,” that would be ridiculous).

ANYWAY. A sleeve. I wanted one. I was also shit-scared about getting one.

If you know anything about my tattooing history, you know that I

It’s not like anyone was all, “If you get a sleeve tattoo, you’re a douchebag,” except for my mother, who harkens back to the days in which tattoos were for sailors and pimps, something she PROBABLY should’ve left out of her lectures to both my brother and I – who both (independently) took that knowledge to mean, “you know what? I DO need a lot of tattoos.”

Let this be a lesson to you, parents: be careful what you tell your children. For example, do not say, “Those weird ear plug things are waaayyyy trashy,” and whatever you do, do not say (unless you will be okay with the outcome,) “if you become an interpretive dancer, I WILL disown you.”

My mom’s big thing was that “tattoos were trashy.” What I heard was: “tattoos are awesome. You should get a lot of them.” 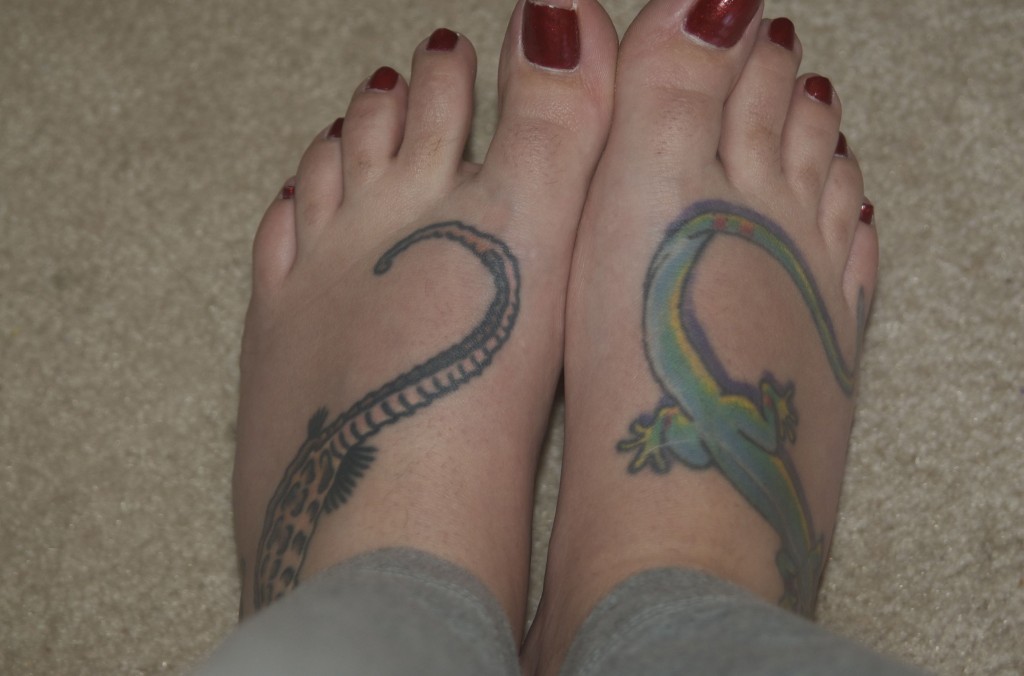 Those ‘ens were the first of my tattoos.

Which, if anyone tells you otherwise, DO NOT BELIEVE THEM: feet tattoos hurt like a motherfucker.

But? They have special meanings to me, which I may explain in exhaustive detail at a later date, but let me leave you with this: a month before my wedding, I got the seahorse tattoo to remind me that I would ALWAYS be okay alone – I didn’t need a partner; I wanted one.

Eventually, after approximately 87 years, I “finished*” this tattoo, which you’re probably familiar with: 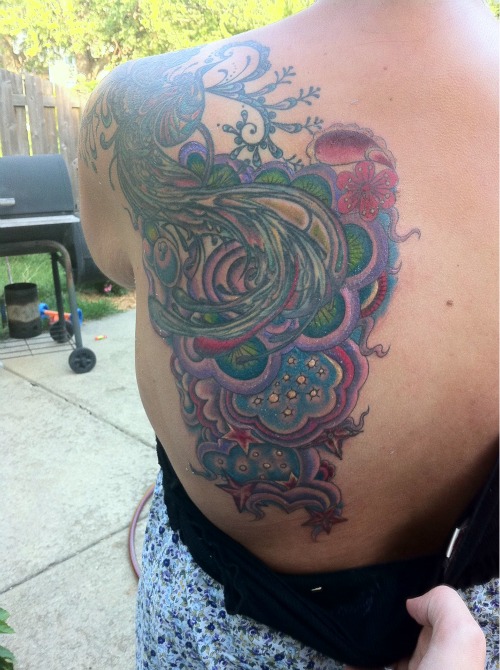 While I’d always lusted after a sleeve tattoo, I just wasn’t brave enough to attempt it. Besides, the only idea I’d had for a sleeve tattoo seemed kinda…silly, and really, a sleeve? On me? I didn’t know if I could pull it off. I was, and I’m being honest here, afraid of the idea. I’d noted that I’d been afraid a lot, over the years, much more than the girl I’d once known – I didn’t like it, but I didn’t quite know how to fix it.

As we drove down to NashTucky, countin’ tires on the side of the road, I let my mind roam – I knew I wouldn’t be getting a present this year, beyond the dildo/highlighter and rad CD tunage (which, let’s face it, is present enough)(If you like John C. Mayer), and I didn’t want that to be the defining moment of my 32nd year on the planet. Besides, no present, BEYOND the John C. Mayer CD would fix my life.

So, I decided to get myself a present.

Something to remind myself of the important lessons I was learning: in my new life, I must be brave; I must learn to take risks and I must be ready to do whatever it takes to get by (note: Craig’s List no longer has “casual encounters” so that’s out.). I must be proud of who I am, stand upright, be strong, and remember that I? Can get through anything.

Dawn had known of my plan – I’d originally planned to get some text written on me like my girl Dana had done, but realized that without doing precisely what she’d done, I wasn’t really going to get anywhere. This meant that Dawn, being the Type-A overachiever, much like myself had already pulled up a list of names and numbers of local tattoo parlors in NashTucky; the ones, of course, with the highest ratings.

When we finally arrived in NashVegas, I began to call the places Dawn had thoughtfully picked out. The first one – the one with the highest ratings – said “come on in!” To which I replied, in my VERY Type-A style, “but do I need an appointment first?” (I loathe doing ANYTHING without an appointment. I’d probably schedule bathroom breaks if I didn’t run my own schedule). Also: the tattoo was the one thing I’d be getting for my birthday and, quite frankly, I wanted it DONE so we could do other things and never mention my birthday again.

We drove through what was probably the worst part of NashVegas, noting the sheer amount of “Quik Cash Payday Loan” shops peppering the sides of the streets, a sinking feeling of “what the shitnuts am I doing?” gnawing my guts. Then I remembered: I was being brave. Also: stupid. But hey, who’s counting?

Finally we turned down a quiet street.

“PHEW,” I said to Dawn, who looked equally stupefied by the locale. “At least all the houses aren’t…”

Yep. For every house we passed, the following three had boarded-up windows. I wanted to scream, SOUTHSIIIIIDDDDDEEEEEEE out the window but figured that I didn’t even have a tampon to bring to a gun fight, therefore I should shut my whore mouth.

Finally we pulled up to a tiny house, lit softly by a yellowish light, the front porch nearly taken up by two white rocking chairs. The humidity and moths circling about the lone light fixture on the porch gave everything a sort of hazy look, and I wondered if this was what living in Florida during the summers was like. The two rocking chairs were occupied by two fairly scary looking guys – I wondered, briefly, if I’d been friends with them in another life.

I walked in first, Dawn tagging along behind me, both of us nervous as cats in a roomful of rocking chairs, because, well, this was a BIG fucking deal for us both.

Pretending I wasn’t shitting my pants (thank GOD for adult-diapers), I walked up to the guy behind the counter and said, “I need a tattoo – two of them, actually.” He looked at me, carefully assessing me to see if I was, perhaps, going to ask for him to write “I heart Nickelback” on my ass or something.

“Where do y’all want it?” he drawled in a very pleasant accent; the kind I’d have been happy to listen to as I went to sleep.

“Right…HERE,” I gestured to my upper arm.

“Whatcha want there?” he asked.

“A peacock.” I replied, suddenly damn certain I was doing the right thing.

It was like the entire room perked up at once, suddenly listening, as though I’d said something ACTUALLY interesting (which, let’s be honest with ourselves – wasn’t like I said, “I KILLED JFK!” or “Tattoo Hitler’s likeness on my bunghole,” or anything).

He examined my arm.

“Y’all know that’s going to be huge, right?” He asked doubtfully, as though I’d expected to have to use a magnifying glass to see it.

I pulled down my dress to show him my back. “I’m good with big,” I smiled nervously, hoping I wasn’t about to make a horrifying mistake.

We examined a few pictures of peacock tattoos online until I found one that I liked. Adrenaline pumping, I steadied myself for (apologies to Mötley Crüe ) the Theatre of Pain I was about to endure…that is, until he began to speak to the actual tattoo guy, who said, “well, let’s make her an appointment tomorrow so I can draw this out.”

Fair enough. I didn’t need someone I didn’t know to go all free form on my arm.

But…gulp, TOMORROW? We had the Country Music Hall of Fame and Studio B to tour! And! And! And!

I threw a small temper tantrum inside my mind as I reluctantly made an appointment for the following day. All that wasted adrenaline. We trudged back outside, and did the only thing we could think to do:

We went back to the lavish hotel and ordered burgers. 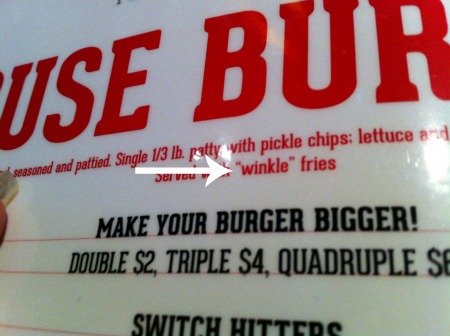 When the brothers Winklevii didn’t appear with our burgers, I won’t lie, Dawn and I were MORE than a bit disappointed.

Part II will air tomorrow because this shit is LONG, motherfucker.

70 thoughts on “NashTucky: Where Fear Goes To Die”