Pashmina lived down the hall from me and was one of the original merry pranksters (although we never called ourselves that). While SHE was blessed with a fucking awesome roommate, my own roommate, It Means Butterfly was about as passive-aggressive as they come. So rather than deal with her bullshit, I escaped to Pashmina’s room whenever possible.

Mostly to steal her booze and smoke, but you know.

Along with Pashmina, the Merry Pranksters included James, who was an RA on another floor. On James’ floor, he had a kid who had a brother who was a bouncer at a club. That kid, in exchange for…something, gave Pashmina and I fake ID’s.

I think we were supposed to give him money, but I never did because that’s the way I rolled.

The bar down the street was a college bar and pretty much so long as you showed them AN ID, they didn’t so much care if your picture showed that it you were actually Sasquatch.

Her name was Arhontia, and she was very, very Greek. But Greek, is another one of those Middle Eastern ethnicities I can typically pass for, if you think about it really hard. But we decided that the best way to get me to pass for a 30 year old tall Greek lady was to pile on the makeup.

I couldn’t see my face, but being the kind of person who wore makeup approximately 4 times a year, I began to panic slightly. But James seemed pretty happy to be working on my face, so I said nothing. Not that I could have, considering he was piling SOMETHING on my lips.

After about 30 minutes, he pronounced me done. My face felt sort of waxy and strange, but I went with it as I made my way over to the mirror to check it out.

What I found staring back at me was Aunt Becky, The Drag Queen. 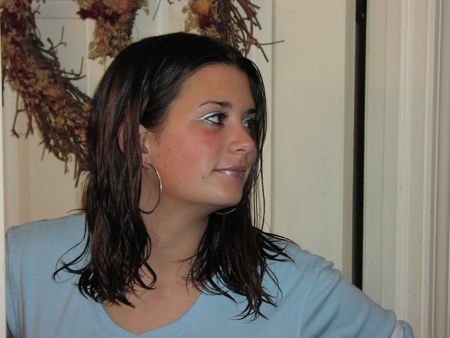 Except that’s a Halloween costume. No, really, that’s me getting ready for Halloween.

Anyway. I looked exactly like a fucking drag queen. Heavy eyeliner, flourishy blush, thick, pancake foundation and lipstick that made me look like I’d just made out with a bowl of cherries. It was bad. Funny, but bad.

He scampered off before I could complain, luckily.

Because I found out later that the reason that I looked like a drag queen is because he’d had plenty of experience making up men to look like women. Several male members of his immediate family, in fact, had used his services to make them look like women over the years.

Which would be why I looked as though I’d walked off the set To Wong Foo, Thanks For Everything, Aunt Becky.

Needless to say, it worked.

Now I need to strong arm Pashmina into telling the bar stories. They were awesome.

And? Today was the day for interviews!

I am here at my friend Miss Spoken’s bloggity-blog.

and here! at my home-slice Chris’s blog (Great Moment’s in Christory)(*giggles*).

Both blogs are full of The Awesome and warrant a read. And not just because I am ON THEM AS WE SPEAK, although that makes them DOUBLY awesome, I admit.

50 thoughts on “Shaved Her Legs, Then He Was A She”