If you haven’t heard, The Apocalypse is coming. I know this because I saw it on a billboard and billboards never lie. Just like The Internet. It never lies. 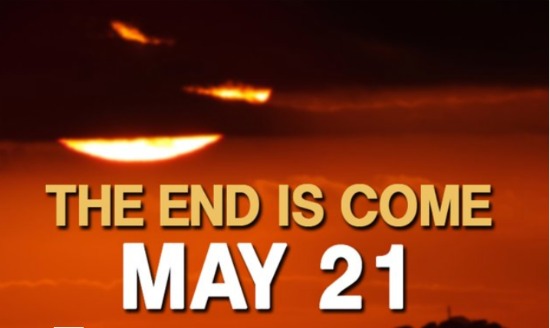 This is not NEARLY as Fear Mongering as it should be.

Here, try this one, Pranksters. See if you feel MORE afraid now: 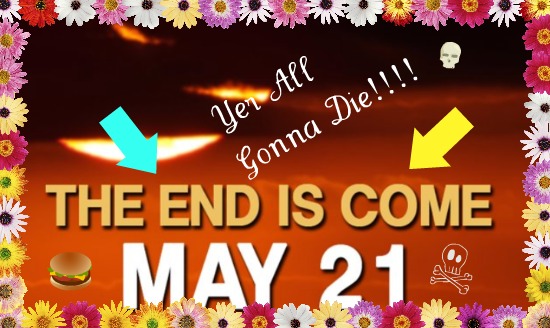 *shudders* It’s the fucking daisies. They get me EVERY time.

Anyway, so this guy said it was SUPPOSED to be the apocalypse back in 1994, but apparently the guy was wrong then. It happens. I mean who WOULDN’T make mistakes while calculating The End of Days?

So this time, he’s sure he’s right. And you know what Pranksters? I’m GLAD. Here’s why.

1) I won’t have to pay off my credit cards! When I’m rotting away in the afterlife, my creditors will too! This is a win.

3) I won’t have to plant any of the shrubbery I bought for my front yard. Let’s be honest here: I’m tired of digging holes and then filling them with plants. Now, I won’t have to!

10) Hell, I’ll never have to pen ANY book, because I’ll be roasting away in the fiery pits of Hades. This will make looking for a new literary agent or self-publishing a total moot point.

15) I will never have to listen to that stupid fucking duck on the Wonderpets say, “This. Is. SEWIOUS” again, because he’ll be all BLAM! BLAM! DEAD.

21) I’ll never have to worry about getting past those stupid pigs in Angry Birds.

36) I’ll never have to clean another litterbox. Less poo = win for all of us.

45) I won’t have to watch Extreme Couponing and feel guilty that I can’t seem to save three hundred dollars every time I go to the store. Because there will be no stores!

66) I can stop plotting the demise of Mark Zuckerberg, John C. Mayer OR Jimmy Wales.

91) I won’t have to worry that someone will send filler flowers (carnations, baby’s breath) to my funeral because there will BE no funeral.

105) I won’t have to hear about the Real Housewives again.

120) I can finally forget about that girl who reminds me of a Chicken McNugget, Snookie.

Why are YOU excited for the Apocalypse, Pranksters?

79 thoughts on “Reasons I’m Glad The Apocalypse Is Coming”