Because I am a narcissistic asshole, I have carefully chronicled the problems I have had with flying. While I am sure that MOST have you have carefully poured over my archives while wearing an “I HEART AUNT BECKY SHIRT” while burning incense at your Aunt Becky Alter, for those of you who haven’t had time, I’ll give you the Cliff’s Notes Version:

*I have been singled out and strip searched by the TSA for most of my flights since I was a small child. I used to think that it was because I was devastatingly sexy, but no, I realized that I actually look sort of maybe Middle Eastern. Racial profiling does, in fact, exist.

*All of my luggage was lost on my honeymoon. In fact, my honeymoon was a disaster from the moment it began until it ended. We did get our luggage back, BUT LOOK AT MY CORNROWS: 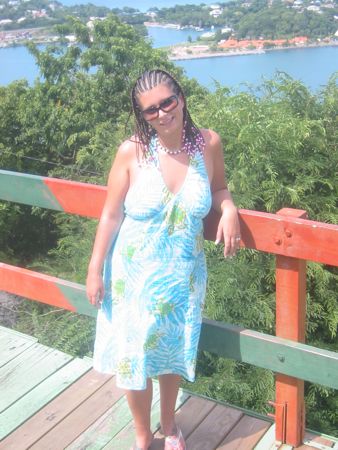 *On our trip to Heather Spohr’s baby shower, the tickets we printed at home were all ‘SEE TICKETING AGENT’ which never bodes well, because obviously. So we were all nervous because we’d never been away before and then the tickets were MYSTERIOUS and turns out, we were on an exit row.

So I wasn’t exactly happy to be getting on a plane to go to my cruise because, well, something always seems to be amiss and airline travel now is a HUGE pain in the butthole. But CRUISE! How could I go wrong?

The flight out was delayed about an hour, but whatever, I was coming in the day before and it all worked out.

The flight HOME, see, now, THIS is where I got fucked.

I’d made the mistake of buying some ridiculously overpriced shit at the salon on the ship. Those of you (read: ALL of you) who will be going on our cruise, HEED MY WARNING, the cruise ship’s salon is INSANELY expensive. So, I bought some shit before I knew what it cost and then realized it was over the 3 ounce limit the TSA allows.

(the terrorists are SO winning)

So I’m all, okay, I’ll check my motherfucking bag. WHATEVER. I drop my twenty-five bucks at the American Airlines curbside check-in and the guy is all “I’ll take care of it for you.” And then I said bye to my bag as it was loaded onto the back.

I got home and couldn’t walk straight which should have been the first sign that I was coming down with the flu, but I’d been traveling all day, so I was all “WHATEVER” and went to bed. The next day, I was equally mumbly and went around in a fog and basically walked into walls and still couldn’t figure out why my brain felt like it had been attacked by ice cream scoops.

The FOLLOWING day, I finally attempted to unpack my suitcase, where it had languished in the hallway, and, upon looking closer at one of my ridiculously overpriced salon boxes, I realized something: it was empty. After calling a meeting of the usual suspects, I realized that it couldn’t POSSIBLY have been my children, who lacked the dexterity to open such a box.

Which meant one thing: I’d been robbed by American Airlines, not the TSA, because they didn’t leave their calling card.

Also missing: my iPod/iPhone/iPad charger (the same piece of equipment).

American Airlines has tried to help but is basically like “*shrugs* We opened a case for you.” Did you know they have a whole DEPARTMENT for this shit? A PILFERED BAGGAGE department? That’s fucked up, yo.

I’m planning to call American EXPRESS (the card I used to buy my ridiculous face cream on) who may be able to leverage a little more weight than me and my Twitter Campaign of Doom will be able to, because genuinely, I’m not thinking much will come of this at all.

It’s just all so fucked up. I mean, we can’t really LOCK our baggage to keep them out because the TSA has to be able to access our stuff at all times to search it, and we can’t do anything about getting our stuff back because how can I really PROVE that my stuff is missing?

If this is the new world order, I don’t like it, Pranksters.