I’ve wanted one of those disco shower heads ever since SkyMall happily informed me that they exist. 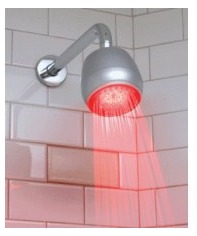 Think about it. No longer would you have to take ORDINARY showers! You’d be able to rock out with your cock out (alternately: jam out with your clam out) as you got clean. If I owned one of those puppies, I’d make EVERYONE who came over take a shower. TOGETHER!

Okay, so maybe not together. Also: I should totally write ads.

Anyway, I was perusing the Think Geek website, looking for the perfect gift for someone now missing a vestigial organ. (one could argue that I could have been talking about my tooth, but as my tooth was not a proper organ, that is neither here nor there).

There it was. In all it’s shimmering glory. Red and blue LED Showerhead. On fucking sale.

Of course I bought it.

It arrived yesterday. I spent the afternoon fantasizing about the disco shower I was gonna take. I got my new iPod dock loaded with Britney Spears and prepared to get up with the get down (or is it get down, get down?).

That was, of course, until The Daver evilly thwarted my plans.

As we ate our dinner, he dropped the bomb on me:

The Daver: (looks at the packaging)

Aunt Becky: “Did I tell you I’m planning Amelia’s birthday party? Maybe we can have it in the shower!”

The Daver: (keeps looking at the packaging)

Aunt Becky: “This is seriously the best day ever. I’m gonna invite my parents over to look at my shower!”

The Daver: “This showerhead doesn’t have a massage setting.”

Aunt Becky: “So? Neither does our current one.”

Aunt Becky: “I’ve lived here for five years and you never bothered to mention that?”

The Daver: “I thought you knew.”

The Daver: “Apparently, you didn’t know.”

Aunt Becky: “I take it I’m not getting my disco showerhead.”

Aunt Becky: “You guys all suck.”

35 thoughts on “Panic! At The Disco (Shower Head)”