*You know what’s bullshit? When people are all, “oh, well, that’s a pain in the….(pause) neck” instead of saying, “ass” or “taco” or “motherfucking asshole” or something. I’m a big fan of profanity. You might even say that I’m profanity’s number one fan. I could wear a Number 1 Finger for Profanity every day. Even if it’s not actually a swear word. Like “pube” or “crotch” which can be totally used in swear form, even if it’s not a swear word.

So, it grieves me to title a post “Pain in the Neck” because it looks like I’m trying to say something else.

For months, I’ve had a pain in my neck. It’s not like a TUMOR or like a little person living there or something, my neck just fucking hurt, and because I’m a responsible person, I ignored the shit out of it. I ignored it until I couldn’t, and finally, I went to the doctor. I hate going to the doctor almost as much as I hate cream-based condiments, and so I’m all *slink-slink* “my neck huuuuuurts” and when he said, “what did you do to injure it?” it was all I could do to not say something juvenile.

So he prodded my neck and was impressed by the spasms he felt. I felt impressed that he was impressed. I give good “spasms,” I guess. Then he gave me muscle relaxants, I nearly tongued him because by this point, I was in so much pain that I would have licked the toilet clean if it meant that it would stop hurting. I practically chewed the tabs after I got them and when I had no relief, I actually did cry (you shut your whore mouth. I can cry in pain, Pranksters) because it had hurt so much for so long and HOLY FUCK MAKE IT STOP.

I was back at the doctor within a week. This time, he prescribed Physical Therapy (in capitol letters).

I was Not Happy (in capitol letters).

Now, I know there are people that swear by Physical Therapy, and I’m sure they have had great experiences. That’s fabulous. PT is awesome for people who are going through rehab for actual injuries, trauma, you know, people who have a need to have P motherfucking T. Unlike me. I still don’t fucking know what I did to myself. It’s not like I was rescuing a basketful of cute kittens from a burning building or something.

My beef with Physical Therapy is this: I like stuff that doesn’t take me six motherfucking months to see results. I was in pain NOW, therefore I want relief, well, NOW. But the doc was convinced that therapy was where it’s at, so I left with my orders, and I promptly abandoned them at home. For a week. Until the pain was bad enough that I was all, ‘FINE, YOU WIN, PHYSICAL THERAPY.’

Turns out, this Physical Therapy shit isn’t so bad. Looks like I might have some “muscle spams” from being “unable to relax” or something.

The worst part is actually the massages. I know, I’m like the only person on the planet that hates massages, but I tell you, I hate to relax. Genuinely, I have issues with it. Laying face down on a table with my head in what appears to be a vagina isn’t my idea of a great way to spend the morning. I’d rather work. Or work out. Or uh, feed the homeless. OR ANYTHING ELSE.

This is not my massage table. But I had to show you the Vagina/Head Hole and why I find it incredibly dangerous (also: why I should never, ever be allowed to alter photos): 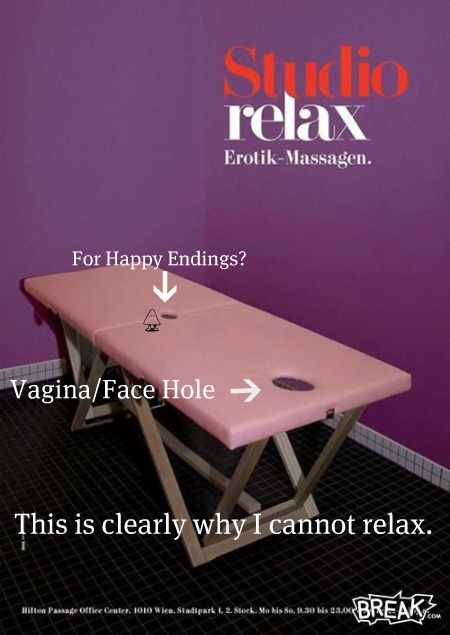 But after the massages, I do some weird electrical thing where they stimulate my neck. I’m hoping it’ll turn my neck into a Hulk Neck. Why be dainty when you can HULK SMASH?

Either way, it turns out, it might be helping a little. I hate to admit that Physical Therapy might actually be worth something.

Even if they don’t advocate drugs. Which, hi, that’s kinda bullshit.

Dude, check out who has an ANIMATED interview up over here at Mompetition. That? Is full of the awesome.

And CHARITY is full of the awesome too. Pulling a David Cook for free Cold Stone for a year, yo.