My neighbor growing up was my best friend. We’d play American Gladiators together after we watched women’s wrestling for hours. She also had everything I ever wanted.

My parents were, as I’ve previously mentioned ad nauseum, teak and fine china people. They were the original wooden toys people (after, of course, the pioneers and the Amish) and would’ve been pretty happy if I played that weird hoop game or made things out of piles of sticks. I’m pretty sure they, at one point, bought me a wooden doll. Yeah, you read that right: I owned a wooden doll. Is it any wonder that I’m as maternal as a sack of rocks?

When I begged them, year after ever-loving year, for a Nintendo, they scoffed at me: Video games? I should be reading a book by candlelight or sewing my own clothes or churning butter. Not rotting my mind on video games!

It bears mentioning that my older brother spent his days and nights playing Zork on the computer.

So Nintendo? I had no stinkin’ Nintendo.

Which meant I spent an inordinate amount of time at my best friend’s house, begging her to let me play one level – just one level. She, delighted at the sudden shift in power, would tell me, hail noes until I got up to leave, and when I did, she’d suddenly develop an interest in playing.

Eventually, my parents bought me a Sega Genesis, so while my friends were teaching Mario to fly with those stupid fucking raccoon wings, I was playing Echo the (Asshole) Dolphin. There went any interest I had in becoming a dolphin lover.

Today, I don’t like games. Can I blame my parents for that? Probably not. But while Daver and Ben sit on the couch at night playing games on their (not so) Smart Phones, I sit and actually watch television. My parents probably DID have a good hand in making sure my attention span was greater than that of a gnat. Thanks, Mom! Thanks, Dad!

But my children, God love them, they love their games. Video games, to be specific. And I’ll begrudgingly admit that video games have come a long way in the past (mumbles) years.

What kills me, though, is this: with all of the awesome games out there these days, my kids still want to play fucking Mario games. Or Sonic games. The shit that was around (mumbles) years ago when I was a wee crotch parasite.

Not only that, the kids love to WATCH those old television shows. The ones my parents forbid me to watch because, like video games, television rots your brain. I was allowed to watch an hour of public television. A day.

But my kids? They’re in love with some creepers “Super Mario Super Show” from the 80’s. And the Sonic the Hedgehog cartoon. Stuff I never saw. And thank GOD for that, because holy creepers, Batman. 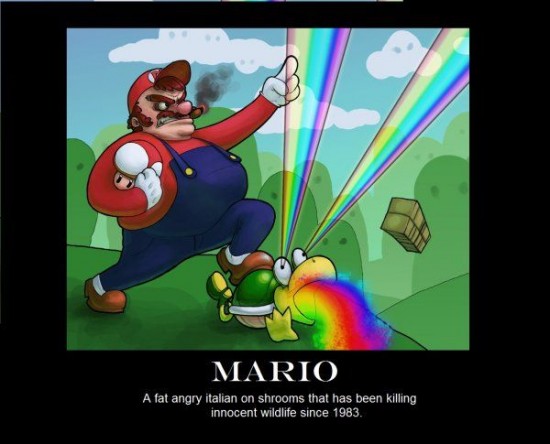 You’d think that with all of the newer television shows with LESS creepy characters, they’d opt to watch them. But no. They’re watching stuff that both Daver and (older) Ben watched. I’d have probably watched them too, had I not lived with hippies.

Now, I’m thinking that the kids need some wooden dolls or that hoop game or some sticks for Christmas.