Scene: Friday/Saturday night in a tiny cinderbox of a dorm room.

Aunt Becky pokes at a water bra she is wearing that she’d borrowed from a girl down the hall marveling at the jiggliness of her new-found perky sweater kittens. She lays in her bed, chain smoking Parliament Light 100’s while occasionally poking her now very pert chesticles, drinking a vodka/diet coke and looking incredibly annoyed.

She scowls at the CD player, which is playing an endless loop of Cake’s “Never There” where two boys are standing, near-crying and singing it at top volume. Rolling her eyes every time they click the BACK button to hear it again, she takes a drag off her cigarette and wonders how to ditch the lamewads.

When I was in college, my two best guy friends would frequently come and stay with me for the weekends when my passive-aggressive roommate was off doing whatever it was she was doing when she wasn’t torturing me by IM-ing her boyfriend at all hours of the day. Maybe designing new POW interrogation techniques or something. We had a tiny dorm room, but somehow we managed to cram the three of us in there for the weekend and we’d make mischief and mayhem throughout the city.

Until they both got lovesick.

I had no issues with either of them dating other girls, since I wasn’t dating them and while we occasionally “slept together” really, it was actual sleeping and nothing else. Even then, I learned not to blur the lines.

But the two of them, Evan and Mikey, they both had girlfriends who went to schools in other parts of the country, and while I was single, it never seemed to matter much. Or if it did, I may have been known to their girlfriends as “their friend ‘BRIAN.'” I’m not sure that it was revealed to their womens that I had a vagina, even if they never saw it.

One weekend, the three of us got spectacularly drunk and rather than lock each other into the shower or go and try and wrap each in toilet paper (so we could look like mummies!) or something, they got moony over their ladies. And HOLY FUCKBALLS did they get melodramatical.

They somehow got their grubby hands on my Cake CD and decided that “Never There” was their theme song. Drunkenly, they wailed it. They cried to it. They pounded their collective fists at the injustice of having to wait weeks to see their lady-loves. They ruined the fucking song for me.

A song, I might add, that I barely liked in the first place because really, if you’re going to pick a song to be moony about, why not Pink Floyd’s “Wish You Were Here?” I can think of 10 better songs* to be all “ZOMG!! I LOVE SOMEONE WHO IS NOT HEEERRREE!” and never, ever does “Never There” make the list.

So there I sat, on my bed, which was approximately 3 inches wide, poking my boob and giggling while it jiggled, rolling my eyes, blowing smoke in their direction (and hoping it would get into THEIR eyes, giving them a better reason to cry then over some trashy bitches). Eventually, I left them a box of maxi-pads to cry into and went out with my other friends to do…something else.

Really, anything was better than listening to those two vaginas cry over their girlfriends.

I say the term “vaginas” with the utmost love, because one of those vaginas was my Man of Honor at my wedding and stood up next to me while I promised to love, honor, and repay The Daver for slapping a ring on my finger. He’s the uncle to my kids and one of my best, most devoted friends. Even if he does have a gaping vagina.

That would be this one: 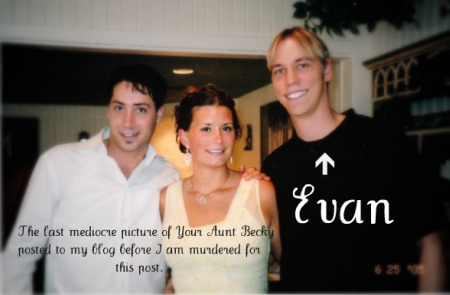 Evan, shown here at my bridal shower. He was forced to sit between his mother and mine, who sat there for the entire shower, discussing how they’d planned out OUR wedding for years. In front of my future mother-in-law. Let’s talk about awkward, shall we, Pranksters?

Anyway. He’s clearly wised up and no longer is dating the Never There girl, and only this weekend was I able to listen to that song again after it randomly came on my Nano, without wanting to drive a spike through my brain.

Also, I am going to be murdered in an unusually gruesome way for posting this story, so it was really, really nice knowing you all.

*That is an utter lie. I could think of only one. “Wish You Were Here.” Which I referenced. What am I missing? I tried to think about it but got calliope music stuck in my head.