First, I have to say that I love you all so much that I am thoroughly overwhelmed by all of your love. Thank you.

So when I say that I’m “not a wedding person,” it’s kinda like saying, “I’m a little stupid.” They’re both understatements that lead to things like, oh, losing your best friends and having to go topless, while riding an angry llama down the aisle of a church* as retaliation.

Weddings are bullshit, Pranksters. I’m love a party like I love a parade, but maybe it’s too many years of serving rubbery chicken and listening to the same vows over and over, or maybe it’s attending the same wedding over and over, I don’t know, but I’d rather gnaw off my fingers than go to a wedding.

I need to be clear: marriage, I’m all for marriage. I am also all for parties, open bar, and gatherings that include dressing up and/or humiliation of my best friends. But please, spare me the Funky Chicken. Take back your plate of gelatinous fish. It’s all the same rinse, repeat, cycle over and over again.

As for me, I’d be down with a quickie Vegas wedding, if I had to have one at all. Frankly, I’d get married in a Shut Your Whore Mouth shirt and happy pants at the JOP office. I love Pomp and Circumstance and any chance to drip with diamonds, but not when I have to fake brideliness.

Last weekend, I’d been invited to a wedding for one of my oldest friends, and, oddly (I say oddly because you’ll actually know them, Pranksters), the friends who make my SHUT YOUR WHORE MOUTH SHIRTS.**

I had no freaking idea what to expect out of this wedding other than that it was in Indiana, which is a state (apparently) that borders the state that I live in (no, not chaos. Illinois) where I have never been. I’ve lived in Illinois my whole life and never been to Indiana or *looks at map* Iowa.

So it was going to be an adventure. Especially since shit has been so fucked up that I’ve been more scattered than normal and barely got a babysitter for the kids in time to go. Because I thought the wedding was this weekend. (I also booked the wrong plane tickets for Type A Mom, which goes to show that my mind has really been elsewhere).

Hitting the road Saturday morning, it dawned on me that Indiana is one of those fucked up states that is a different time zone than Illinois, which operates under the superior time zone of Central Standard Time. Quickly, I whipped out my iPhone and googled the name of the teeny town that the wedding was held in and sure enough, there it was, Eastern Standard Time. Which meant that I was now an hour late.

I’m sorry, but states that butt-hump each other should NOT be on different time zones. When I rule the world, along with mandatory naptime I will make sure that this is the law.

Because I can’t keep anything to myself, I told Twitter, who had a hearty laugh at me, patted my head like the good dumbass that I am, and then the open road called to me. Shockingly, through some miracle of space and time, the wedding was NOT on EST and therefore I was early. Huh.

Indiana, oh, Indiana, I have to say that I love you since you are not Wisconsin, the archenemy of Illinois, but really, I’m not sure that you altered my perception of the world. Except that I learned that Air Supply was still touring. Casinos. In Indiana. I got horribly depressed about that, even though I didn’t know any Air Supply songs.

Anyway, back to the wedding.

First thing I noticed was that although the invitation said this would be a wedding in a barn and backyard, it was freaking awesome. I think barn, I think people humping sheep. This was not that kind of barn, Pranksters. THIS barn had stainless steel appliances, a full bar, a full bathroom with a shower, a pool table, slot machines, and immediately I tried to move in. 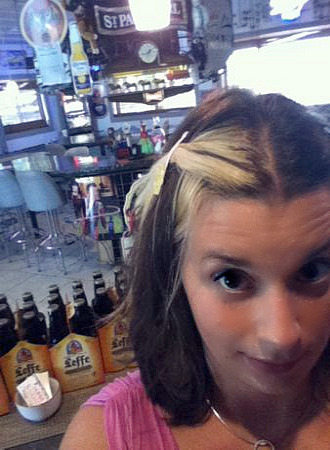 I was aghast that a barn could be cool. I’d always assumed that barns were merely used as a place for animal husbandry.

This was the point where I realized that the more pictures I took in the place, the more I could claim that, yes, I did live there. Why the hell else would I have so many pictures of myself there?

It’s also the point where I realized that this barn had a kitchen nicer than my own.

It’s at this point when the homebrew of my Metal Friend Scottie kicked in. Oh, did I mention this was a METAL wedding? And that these people are REALLY why I’m like this? Because it’s true. 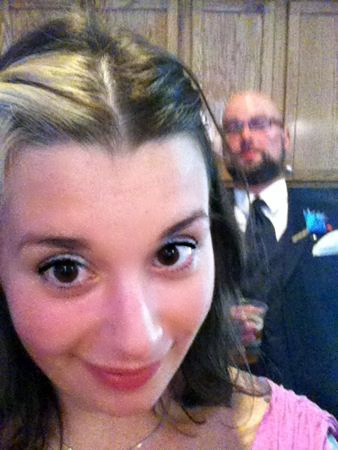 The Metal Heads started popping into my pictures. There’s Scottie. 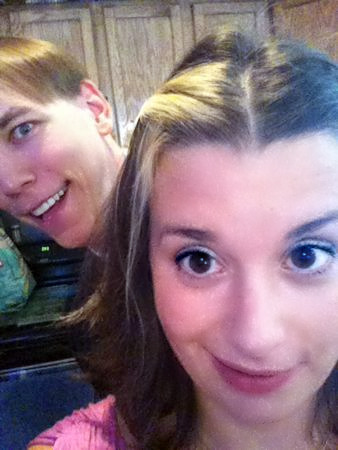 And that would be Evan, one of my BFF’s.

After we got suitably toasty, I watched one of my oldest friends get married. I’ve known him since we were both 14, and it was just so awesome to see, which means that my heart is slowly melting. Shut UP.

Then, the coolest thing I’ve ever seen at a wedding happened: a Moon Bounce was blown up. Dude. Pranksters. At my next wedding, I am SO getting a Moon Bounce AND a Ball Pit (one that hasn’t been peed in by small children) and it’s going to be epically awesome.

During the toasts, which normally are only interesting to the people involved (and then only marginally, because let’s face it, not everyone is a good speech writer, myself included), we toasted to meat. MEAT! Meat is like my third favorite thing on the planet, only beaten by the word “cacophony” and strawberry lip gloss.

Toasting to meat is very serious business, you see.

Metal Weddings are, apparently, the best kinds of weddings. I even remembered all of the stuff I’d learned from strippers over the years. Who knew?

*Okay, it was leading the prayers, but still.

**I’ve been asked about the sizing, and I wanted to tell you that for women, I’d order up a size. They’re SUPER-flattering (in a bizarre twist that I couldn’t even predict), but they do run a little small. For example, I have big boobs, and normally wear a M or L. I wear a L or XL in these shirts. But trust me, you’ll look fucking hot.

Also, colors? I need to reorder shirts and what colors should I order, yo?

P.P.S. If you do buy them, I want to make a Flickr group of Shut Your Whore Mouth Shirts and you should send me a picture of yourself in one. Or doing something weird in one. Because, OBVIOUSLY.

54 thoughts on “Moon Bounce Your Way To My Heart.”