Nothing like a party with actual guests* to make me realize that it was fucking time to take care of some bizness. Namely, the house.

Now I am not an interior decorator. I don’t even play one on television (I do, however, play a doctor and/or the village idiot, so that’s something). I’ve never sat through a home improvement show – not even the show Home Improvement, but that’s because Tim Allen makes me want to stab out my eyes – nor would I care to. In fact, I’d rather gnaw off several toes than have to sit through one.

I’ve tried, mostly because I figured I could learn about this mysterious “eye for style” which, it turns out, is not something that can be acquired during ten or so minutes of one of those shows. My idea of a pretty room is one that has unicorns, glitter, and/or an Uncrustables machine, which means that my new house, the one I’ve lived in nearly five years, has been decorated in what can only be considered “found by the side of the road” style.

But if I have people over, it’s time to pretend that I may actually be a grown-up…or at least play one for a party. Which meant it was time for some motherfucking home improvements.

Because I am a bad blogger who takes lousy photos (when did being an incredible photog become part of being a blogger?), I did not take any “before” pictures. The room I am currently working in, my dining room, was painted what I liked to call, “Cat Barf Green,” although some of you may find it to be more “Cat Pee on Plasterboard.” Frankly, I’ll be interested to see what you decide upon.

This is the room BEFORE we moved in. Which means this was NOT my furniture.

Not sure what you’d call it, besides butt-fugly, but that’s what it was.

For years, I’ve worked in here, gritting my teeth as I looked at the hideous paint (recall also, those of you who love the shade, that I am color-blind)(and those of you who LOVE the fake flowers, it’s like I don’t know you.) and that awful chandelier, but there has always been something – anything – else that prevented us from fixing the room.

It’s the “If You Give A Mouse A Cookie” problem. If I painted, I’d want to replace the fug light fixture. If I replaced THAT light fixture, I would also need some new art for the walls.

So the room has remained, silently taunting me until last week, when I realized people would be coming by. AND JUDGING MY HORRIFYING TASTE. It’s not like I could put a disclaimer on the walls, like, “Objects In Here Are Not Aunt Becky’s Choice.” Well, I guess I COULD, but that’s weird.

Instead, I decided to strap on a set of balls and get ‘er done. Daver took the kids to his parents this weekend and Ben and I spent about 40 straight hours working on the two rooms (I’ll show you the other room tomorrow. Couldn’t get any decent snaps. Suffice to say, it was painted 2 different shades of white.). 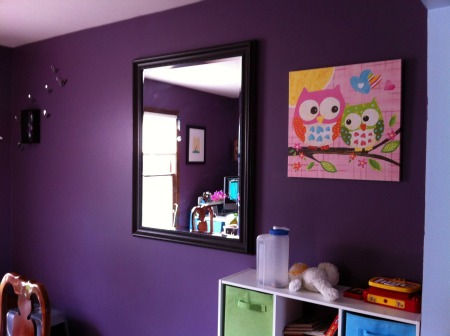 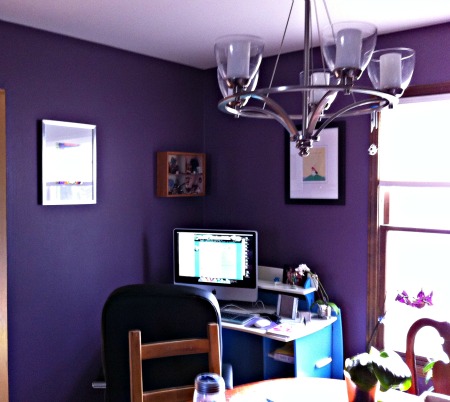 Here’s where I ask for your help, Pranksters: I need some nice, beautiful, colorful pictures to hang on my wall around my desk. I’d go to Etsy, but I get overwhelmed every time I try.

Also: I need an old light box – you know, the thing where they used to hang X-Rays? That.

Any suggestions? Also: how was your weekend? Also also: can you give me a massage? I’m fucking sore. Also also also: apparently ninety-years old.

*Email me if you want an invite – I’m serious. I will insist that you admire my walls, but this is gonna be fucking fun.