“Do you think Ozzy is alive?” Dawn asked as we made our way to the Black Sabbath stage on Day One of Lollapalooza, trying to distract me from the guy wearing a skin shirt.

“Nah, he’s probably been propped up like the guy in Weekend at Bernies, or shuffling around backstage yelling, ‘SHAARRROOOON.’ I mean, it’s Ozzy, right?” I replied.

“Do you think they’ll be okay to play a full 2 hours? That’s a long time for an old man,” Dawn suggested.

“Well, I think staying here to see Black Sabbath one last time is important – yeah, the Black Keys are awesome and all, but let’s be realistic: Ozzy won’t be around for another tour,” Dawn brought up a very good point.

“Yup,” I agreed, neatly avoided the stray beer cans left on the ground, which, I’ll confess – I wanted to pick up and recycle.

We stood; a moment of silence for Ozzy, before finishing our walk to the stage.

Surrounded by metal heads again, I felt right at home.

I even found a boyfriend: 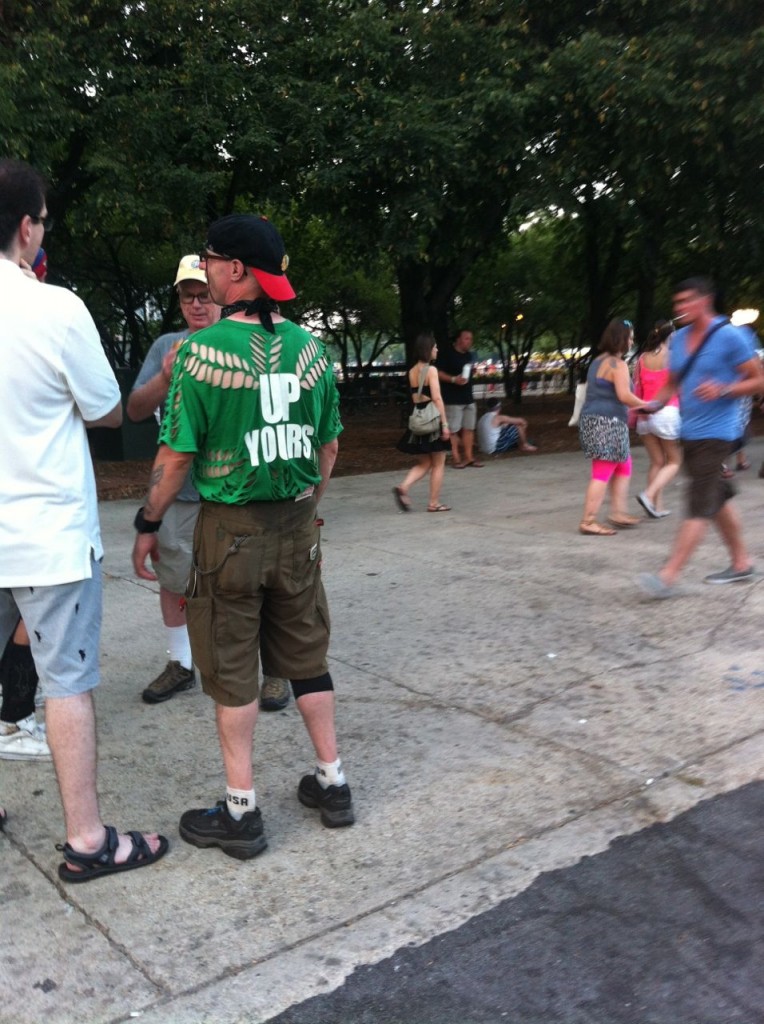 Stand back ladies (and gents), he’s taken. BY ME.

Finally, the Prince of Motherfucking Darkness took the stage: 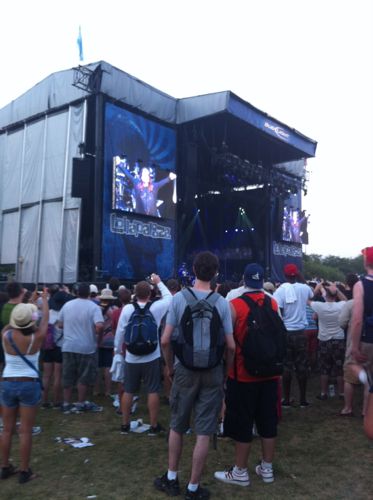 He looked good … for a dead guy. I noticed then that my feet, well, the flippy-flops I’d carefully selected (read: thrown on in seconds before walking out the door), they’d begun to…hurt. And not in a “oh that’s cute” kind of way: more like in a FUCK MOTHERFUCKER PAY ATTENTION TO ME sorta way. Standing didn’t help, but after watching the chick in front of me vomit onto the lawn only to have some guy then take her spot and PUT HIS HEAD IN HER VOM, I realized that I was better off standing than not.

Vomit – or the threat of sitting in vomit – does that to a girl.

And then, THEN true love began:

Really, I’d like to moan about my blisters, but that guy leaves me speechless.

Because I bet THAT guy has the joy, joy, joy, joy down in his heart. Or is very intoxicated – hard to tell the difference.

23 thoughts on “Lollapalooza Day One: Is Ozzy Alive?”