I knew from a very young age what I was going to be when I grew up. While the other kids focused their sights upon flying into space or fighting fires, in kindergarten I neatly drew a picture of myself, one that my mother has framed somewhere, that says, “Rebecca Sherrick” “Obstetrician.” 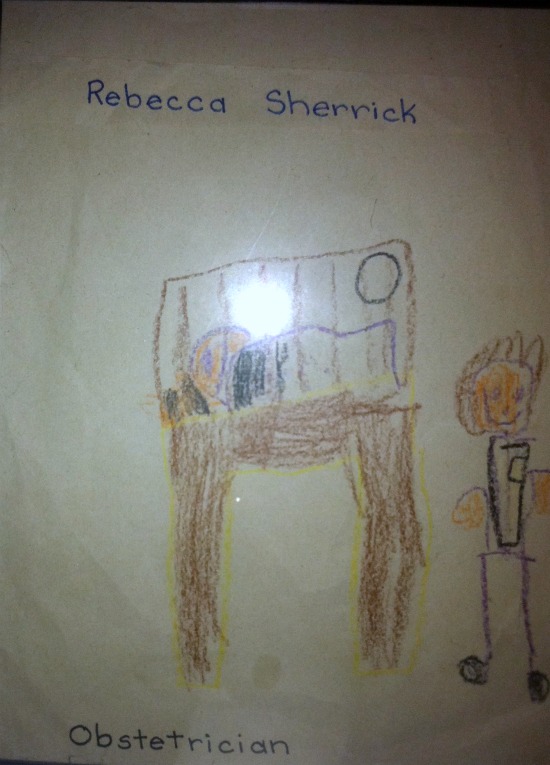 Because that was what I planned to be.

Would it have worked out if I hadn’t popped Benjamin from my nether regions, a pregnancy unexpected, a life forever changed by the furious meeting of two gametes?

I honestly can’t say. Who can see what might-have-been when what-is is right in front of our faces?

When I went back to school, a single mother with an autistic baby slung ’round her hip, I re-enrolled (which is highly UNLIKE Rick Rolling) as a nursing student, which meant two things:

a) None of the credits I’d obtained during my brief stint as a Bio/Chem major were accepted and I had to re-enroll in different, easier versions of similar classes.

2) I had to come to terms with letting go of a dream I’d had as long as I can recall.

The first year of pre-req’s was heaven for me. I’d already completed the more complicated and challenging versions of the same classes, so I quickly rose to the top of the class. I was chosen to TA for numerous science classes, putting me smack-dab back into the lab.

I couldn’t have been happier.

I left my first class as Student Nurse Aunt Becky in tears. I’m sure I looked half-insane, walking to the train, my bag full of books I didn’t give a shit about, openly sobbing the kind of ugly cry that comes from a broken heart.

Rather than entrench myself in sorrow any longer than I had to, I simply made new plans. I’d re-enroll in school and become a microbiologist once my son was old “enough.” I’d juggled single parenthood and schooling as much as I ever wanted to and I intended to see at least some fraction of the kid’s childhood.

I did and I have.

Nursing career handily abandoned as, for the first time ever, I was able to stay home with my son, things didn’t go quite as expected. The quirks I still found so charming made for lonely company as he preferred to live inside his head to being with his mother. Coming off an over-worked, beat-my-A’s-with-more-A’s high, I had hours upon hours each day to fill.

With something. Anything to make my life feel worth living again.

I obsessed over the grout between bathroom tiles – which, no matter how many toothbrushes I wore to nubs- could never quite come clean, my son happily watched the same video about the planets over and over. I waited for something, anything to tell me what the fuck I was supposed to do next.

“Why don’t you start a blog?” The Daver asked after I tearfully wept, once again, that “I hadn’t worked my ass off to sit around and wonder which fucking brand of dishsoap was better.”

I couldn’t have thought of anything I’d like to have done less than blogging. I’d never so much kept a journal, so blogging, writing down my thoughts so that someone, somewhere could be equally bored by them?

Until I decided to do it.

Learning that I could write things that didn’t involve this:

was like learning I could breathe underwater. All this time that I tried to find meaning in the bathroom tiles had been for nothing. Because I had this ability and I could use it.

I’ve spent nearly four years here at Mommy Wants Vodka, and three before that at Mushroom Printing, telling stories. Some good, some awful, most mediocre. I’ve used my words to let you into my world. To see things as I do. To touch each of you reading these words in some way, even if it’s a disgusted “God, this chick sucks.”

The words I have written, the friends I have made, the connections I’ve foraged has been so much more than I’d anticipated. I have been beyond blessed.

And yet, I’ve been thinking a lot lately about going back into academia. To return to those glorious calculations and those beautiful microscopes, leaving the world of words squarely in my past. I wonder if that’s even possible; to shut one beloved door so firmly. I don’t have an answer.

So I’m left wondering: is this my legacy? A few pixels blinking on your computer screen? Words turned into sentences turned into paragraphs?

Moreover, is this enough?