*If you didn’t get it, I was making a reference to the SEA, Pranksters by referencing knots, which I think are some sort of sea thingy, or maybe they’re actually not. I could be referring to DON KNOTS who isn’t from the sea, I don’t think. He could be a Poseidon for all I fucking know. I’m still half tripping from the Dramamine, which should come with the label “WILL FUCK YOUR SHIT UP, BITCHES.”

Anyway, so I am back from my cruise and let me tell you that it was FULL of the awesome. Technically, it was a WORKING vacation, and Angie and I have come up with a fantastic idea which I will reveal tomorrow when the walls stop moving and I stop walking into my dogs.

So we were on a motherfucking boat wearing our flippy-flops, with apologies AND accolades to T-Pain, which is sort of like a traveling NASCAR fan hotel with all of the assorted classiness and hilarity that went along with it. I’m telling you that people watching cannot be better anywhere.

I got my first decent massage AND my first taste of true bad taste on the trip.

The massage was by a British woman and she was alarmed by the state of my stress level (an 8)(what, is that bad?) and the state of my back. Apparently, it was all kinds of tight and wound up and that’s apparently bad. Pretty much, she said that I would die unless I got more regular massages and stopped being so stressed out and maybe took better care of myself.

I tried to interject with “does Vicodin count as a stress reliever?” but then she sort of laid on my back with her elbows and I wept in pain and couldn’t speak. Or I could, but it would be a scream. I tried to make her tell me that my back was “knotty” so that she’d say something like, “Oooh, Rebecca, you KNOTTY girl,” and maybe then smack me around, but no such luck.

Just more of the elbows and threats of reducing my stress or “death.” WhatEVER.

The ship wasn’t exactly decorated from this era. In fact, it’s pretty much the LAST sort of decor that you want to see if you’re drunk and/or seasick, but it’s pretty much full of the hilarious. Brightly patterned carpets and brass and wall paper and colors! every! where!

It’s going to be vintage soon.

The worst place that I found was this: a HAND bar. I want whatever they were smoking when they decided that THIS was a great concept for a bar, because it had to be strong.

So you’re walking down the way and you see THIS: 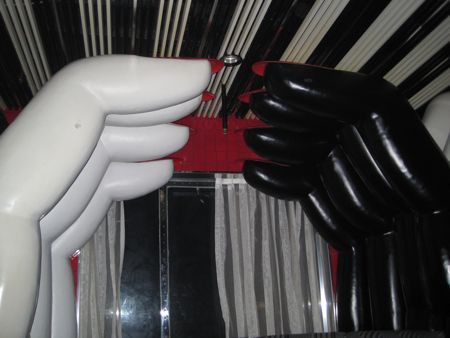 Two giant hands. I assumed, nail salon. TACKY nail salon, but nail salon. Nope. The strains of a bad keyboard player ministering to a group of cougars wafted out and I could make out “My Girl.” Badly. 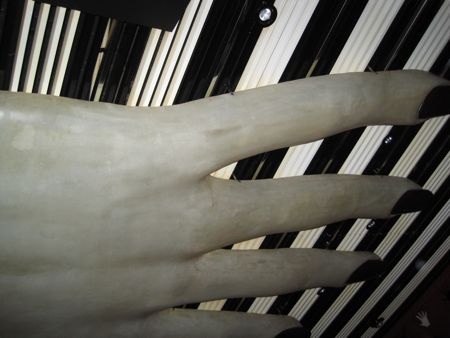 THAT is over the bar. I cannot impart how scary that looks. It’s a gigantic hand. Over the bar. What. The. Fuck.

The horrible keyboard player belts out shitty songs and drunken cougars vie for his attention and suddenly I’m horrified AND embarrassed. 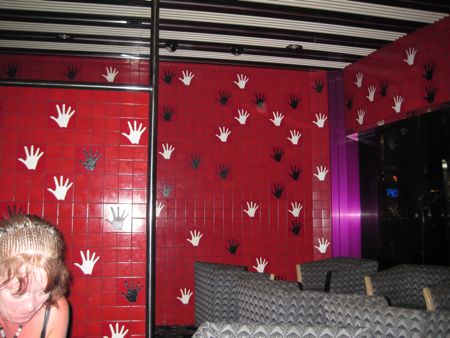 The wall is home to the handprints of his conquests? OR VICTIMS… 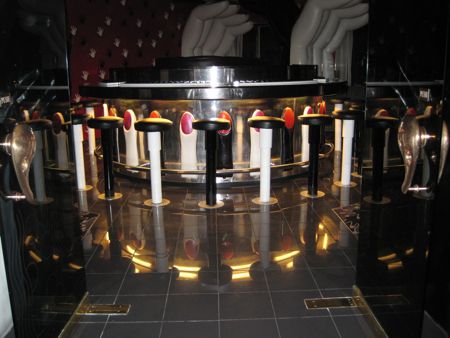 The fingers wave creepily as I back out of the bar, happy to have escaped with my hands intact.

I’ll never listen to “My Girl” the same way again.

78 thoughts on “Knotty* By Nature”