I’m not very good at relaxing. Those who know me best are sitting at their computers, nodding vehemently while (perhaps) shouting, “No shit, dumbass.” Even if I win at life*, I suck at relaxing.

When my life gets stressful, like it has been for the past few months, instead of doing the smart thing and taking a nice bath** or zoning out and watching some reruns of The Girls Next Door, I work. More. I take on more projects. I buy diseased plants from the nursery just to prove to myself that I can rehabilitate them. I add more pressure. When I feel that pressure? I add even more. 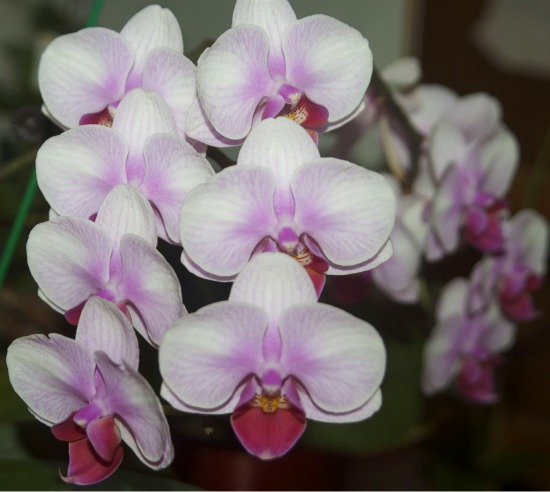 I actually DO own this orchid – and dozens more like it. They’re blooming right now. It’s gorgeous.

It’s a vicious cycle. It’s also how I get so much done.

Until I hit That Point. The point at which I realize I have so much on my plate that it’s going to smother me while I sleep like that pink goo from Ghostbusters II if I don’t watch out.

It’s now the time of year in Chicago in which dead people vote, roads begin to get worked on, and everyone slithers out from their houses, all pasty, sluglike and squinting into the sun. We’ve not been outside unless it’s on the way to or from the car for the better part of four months, even after a winter as mild as the one we just had. We’re all a deathly shade of what I like to call, “Midwestern Pallor,” and we’ve, of course, forgotten how to be neighborly. After all, we’ve been hiding in our houses for months now – we’re just as likely to try to gnaw on our neighbors as we are to invite them for a BBQ. Our social skills have gone down the shitter.

But this weekend was one of the first genuinely nice weekends we’ve had in months that I didn’t feel like I was going to die from the flu or whatever. It was 80 degrees and sunny, though the chance for thunderstorms loomed large, they didn’t happen until nightfall.

I strapped on my ugly gauchos and an ill-fitting tank-top, noting my particular pallor was even more pronounced than normal, as I prepared to Tackle The Garden. If you’re read my blog before you will know two, maybe three things:

1) I love to garden. I also love hotdogs, the color blue, and Tom Jones.

B) The people who first owned the house went all bush-wild and added a fuckton of professionally landscaped – yet hideously fug 70’s style bushes. No, not vaginas. Although everything WAS a bush back then. The people who I bought the house from had let it all go to shit, so I’ve spent the better part of two kids and four years trying to hack the garden into submission.

For the better part of two days, The Guy on my Couch and I tackled the garden. Mulching, seeding the lawn, bagging up refuse, watering, pulling weeds, training roses (sadly, not to shake or speak).

It was the best, most stress-relieving thing I’ve done in months. I’m reminded again of how much I need balance in my life. How much I need to stop, smell (or spray) the roses. How much better I feel after a good solid day’s worth of solid hard labor. How I need to remember that not everything is such! serious! business!

How I need to stop pushing and learn to breathe.