I married Isis on the fifth day of May,
But I could not hold on to her very long

So I cut off my hair and I rode straight away
For the wild unknown country where I could not go wrong.

We drove through the night, relator chirping about in the frontseat while I sat in the back, staring out the window, watching the scenery, crystallized in the cold January ice, seeing things I’d seen before, only different. Dave sat in front, chattering about with the realtor as I blew into my hands, trying to blow the cold clear on out.

Carefully, we approached the last house on our list for the night, a hulking monstrosity built in the 1970’s, similar – but not identical to – the house I grew up in. Cold crunched the tires, making a somber squeak, as we pulled into the driveway, the lights blazing inside bode a warm welcome from the howling night. Dave and the relator zipped on ahead to greet the owner as I stood there a moment alone, under the tree, which, in the frigid January wind, tinkled mournfully like the world’s saddest windchimes. I looked up and noticed the streetlights as they caught the ice encasing the branches, and the whole world seemed to shimmer for a moment.

I stood there mesmerized, not feeling the cold seeping into my bones.

As we rode through the canyons, through the devilish cold,
I was thinkin’ about Isis, how she thought I was so reckless.

“It’s so beautiful,” I said that spring as we drove through our neighborhood, the trees lush and green, their branches happily intertwined from either side of the street as though they were trying their hardest form a canopy above. I could spy bits of blue sky between the leaves, but driving ahead, it appeared as though we were driving through a secret cove to our home.

Then I rode back to find Isis just to tell her I love her.

She was there in the meadow where the creek used to rise,

Blinded by sleep and in need of a bed.

“What’s this?” I asked, blinded by exhaustion and in dire need of a bed to rest my body as the early morning dawn rose, the sun wrangling it’s way upward, as if to remind us that if we had forgotten, once again, we’d been up most of the night at the hospital with our young son and infant daughter. The words ran together in an alarming manner as I tried to piece together the letter that had been unceremoniously shoved into the mailbox under the tree I had, what felt like a lifetime before, stood and listened to the music it had created.

I gasped as though I’d been sucker-punched.

“Which one?” Dave asked me, blearily trying to understand the words I was stringing together. I nodded at the Ash tree, which had once sung me a mournful song, as if to warn me that things would not always remain the same. Tears inexplicably filled my eyes, which I quickly swiped away, blaming them on exhaustion.

I came to a high place of darkness and light,
The dividing line ran through the center of town.

“They’re clearing the Ash trees from our side of town,” my mom told me one afternoon, the following summer. “They neighborhood looks so different.”

I fixed my gaze on the tree outside my window which had once sung a lone haunting melody, and, lost in thought, murmured my displeasure as my daughter crawled up my leg, trying to figure out what Mama was staring at.

“They haven’t started here, yet,” I said hopefully, still looking at my tree. “Maybe my tree will be okay.”

She simply stared at me, words unspoken.

The earth woke up this spring, telling me tales of a mild winter, the ground cold, but not frozen as I planted flowers of purple and pink, the tree slowly waving its barren branches above me as if to warn me. You don’t mean it, I said to the tree as I worked in the yard, growing something beautiful where none had grown before. You can’t mean it.

The tulips I’d planted years before bowed and bobbed in the warm spring breeze, as if to say, “almost time, almost time.”

Silly flowers, I thought. What do you know about death and dying? All you know is rebirth, starting over. 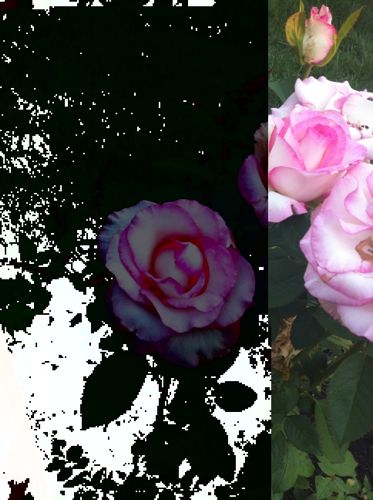 The tree dropped a branch, long since dead, next to me as I worked the earth, as if to say, “believe me now?”

When he died, I was hopin’ that it wasn’t contagious,
But I made up my mind that I had to go on.

“Mama,” my daughter asked a couple of weeks ago. “Why’s there a purple and pink dot on the tree?”

I broke into the tomb, but the casket was empty
There was no jewels, no nothin’ – I felt I’d been had.

“Did you see that there are no-parking signs outside?” Dave asked on Monday.

“The city must be taking down our tree,” he continued.

“Finally,” he said as if he’d been waiting his whole life for that sign.

I nodded again, turning my back so he couldn’t see the tears.

How she told me that one day we would meet up again,
And things would be different the next time we wed.
If I only could hang on and just be her friend

I still can’t remember all the best things she said.

Branches half dead now, entire sections of the tree destroyed, the tree still stands in front of my house, as if to thumb its finger at passers-by: yeah, I’m still here.

Trying in one last attempt to save itself, the tree has grown saplings that jaunt merrily from the bottom, a sign of renewal in a time of death. I want to run out, screaming, give up and give in – let go, it’s over.

It’s time, I tell the tree each morning. It’s time. It’s over. Give up. I’m sorry I didn’t listen – you were right.

This time, I listen.

I still can remember the way that you smiled,
On the fifth day of May in the drizzlin’ rain