I sat there, on my freshly cleaned couch (thank you o! gods of steam cleaners), in a group of my very best friends. We were eating the greasiest of greasy pizza, occasionally stopping to fetch a rogue binkie or wipe a dirty face. We laughed, talking about the times we’d shared, where our lives had randomly found us, pausing now and again to wipe tears from our eyes.

These people, my friends – my very best friends – they’d flown in from all over the country to celebrate my daughter’s birthday with me. They didn’t have to. I didn’t have to threaten them with a tube sock full of quarters. They did it because they wanted to be there with me, with us, together.

I’d never felt quite so at home in my living room.

It had been so long since I’d sat in my home, surrounded by people who know me as I am, fucked up bits and all, and laughed so hard that I was afraid I was going to whiz myself.

Seeing packages that my friends, my Pranksters, had sent for my daughter, knowing they’d cared enough to send her something for her third birthday, it reminded me of the connections. How lucky I’ve been to know so many wonderful people.

I have never been so happy to be wrong. No, not about the un-dead.

When I get asked about making money blogging, after I stop laughing, I’m always a little bit…stung. Not because I don’t understand the desire to make a little cash on the side, but because to me, it’s not what it’s about.

I’ll take the friends I’ve made, the connections I’ve formed over a stack of cash any day.

A pony on roller skates, tho…well, maybe not so much. 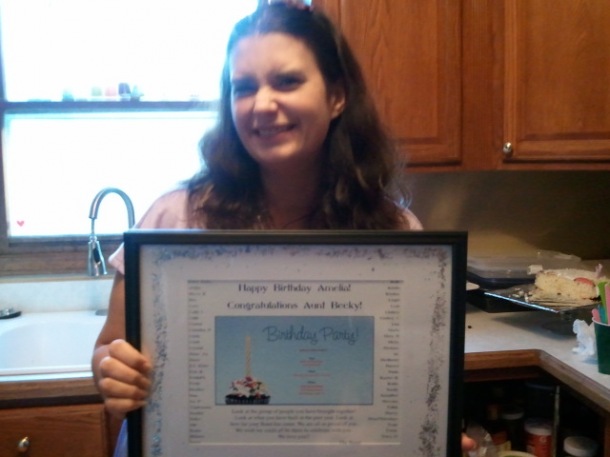 A present from my very best friends who work with me on Band Back Together.

(if you’re a member of the Band and would like to vote for Band Back Together at the Weblog Awards, you may do so here. MWV is nominated too, which OMG, but The Band deserves the award for all of the bravery they’ve poured into our site.)