As bloggers, we have an open line to our readers which is part of the reason that the old media is having such a hard time keeping up with us. Bloggers have had to learn on our feet about what works and what doesn’t work. What brings readers in and what makes them stay. Likewise, we’ve had great ideas that have bombed and left us scratching our heads wondering what. the. fuck?

It’s the lack of editors, the lack of middlemen, the direct link to our friends that have made blogging and bloggers succeed where newspapers and magazines are failing. You’re not reading about the blood and guts behind the blank-eyed newspaper columnist’s life–not because she doesn’t have one, or because she doesn’t want to write about it–but because that’s not what they do over there.

But that is what we do.

Without filters in place, you get our blood, sweat and tears. It’s what binds us together as people and it’s why we connect with each other. Most of the time, I happen to think, it’s a good thing, and sometimes, it’s a very bad thing. No one wants to be attacked at the core of what we are. Personal attacks always hurt, no matter how much we say, “aw, it ain’t no thing.”

I don’t think there’s any shame in saying that it hurts when an Internet Mole Person (a.k.a. A Troll) calls you a bitch, or a fucking bitch or says this:

“I don’t know how I stumbled on your blog, but it seemed interesting in the early days. This post is crap, grow up, get a life like the rest of us did.”

That’s a comment I got. I don’t get a lot of nasty comments, and for the record, the post was badly written, but, as I pointed out to this person, “Someone who spent 29 hours on my blog should hardly tell be telling me to get a life.”

IP addresses, I love you.

There are other dark sides of the Internet, which I was reminded of this morning, when I woke up to an inbox stuffed full of messages telling me that my Mother’s Day post from this year had been stolen by a notorious blog plagiarizer. She changed the date so it “aired” the day before, but I have a screenshot showing that it did not actually do so.

I am only linking to her so that you may see if your material has been jacked too. I hate to give her any more traffic than she deserves. She had another blog, which also stole that same post, a post that was particularly meaningful to me, but she locked it down. Both sites creepily have different children as her own.

The mind that goes on behind running a fake blog composed of other people’s work is very fucked up, indeed, and while I am furious because while I reported her to Google for violation of Terms of Service and went on a Twitter Rampage of Doom, there’s not much I can do.

The bright side of this is how awesome my Band of Merry Fucking Pranksters are. Just look! 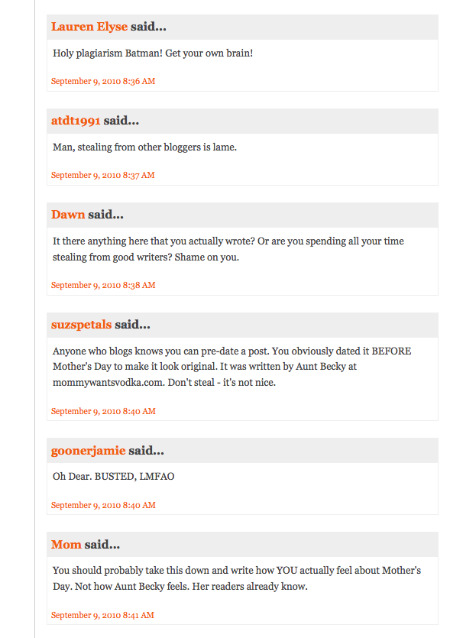 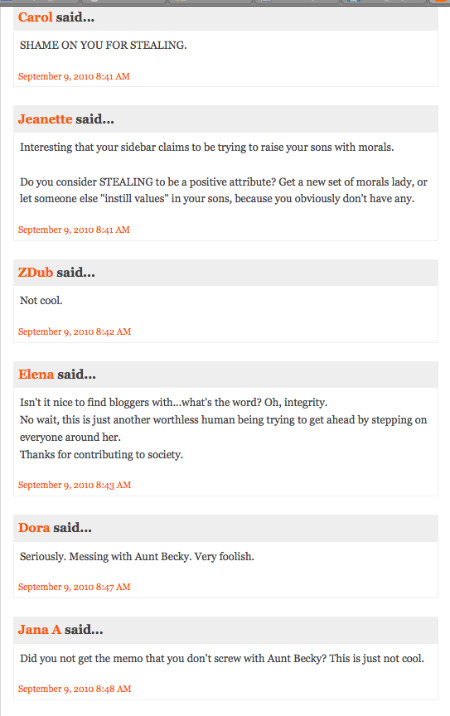 I about passed out laughing. You guys are fucking amazing. Seriously. I love you all SO MUCH.

All of the comments on that blog are from people bitching her out for stealing their posts, so clearly, it’s not just me.

This, to me, is the best part about the blog world. There may not be much we can do about stuff like this; I mean, MAYBE Google will shut her down, but I doubt it, but we all rally around each other when things are bullshit. And this, Pranksters, is BULLSHIT.

What’s interesting is that the new group blog that I’m working so hard to create this week is a site based around the concept of rallying around each other. It’s clearly what we do best and it’s one of those things we all like to do. Hell, I prefer feeling useful to feeling like I’m just sitting around taking up space.

It’s SO close to being done and I’m itching to show it off like you cannot believe, because I think all of you will want to be a part of it. I’ve been gathering material from some places so it has some stuff in it already, but when it opens, you can use anything you’ve written or anything you will write in there.

So rather than focus on the plagiarizer and the negativity she’s spreading around today, I’m going to focus on the good things:

The new blog I’m working on. The hilariousness of Mushroom Printing. How fucking awesome my Pranksters are and how blessed I am to have you all. And how odd it is that I am Number 9 on this list.

And, of course, bacon.

Since I am working on a site, I have a quick question for you. That Google Friend Connect box on the sidebar: 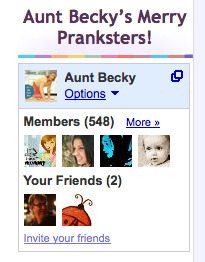 That is a picture, not the box itself, yo.

Do you guys like these on a site? Should I put it on my new site? I added a poll!