Last summer, during the Great Bush-Whacking escapade, I spent quite a bit of time perusing the Serial Killer Section of the Hardware Store. I had to buy the proper supplies to remove the eleventy-million bushes that had taken over my yard; making me look like some creepy (ier) shut-in who probably killed people in her very secluded (looking) house.

I figured that anyone who spent as much time as I did ogling shovels and pickaxes was probably carefully watched by the FBI as a Potential Serial Killer. (if they’d seen the bushes in front of my house, they’d have redoubled their efforts to apprehend me)

Sadly, I’m not a serial killer. In fact, the pickax I’d so lovingly bought nearly broke both of my ankles when I tried to use it. I should know by now that I’m not coordinated to be a serial killer.

After my daughter was born so sick in 2009, I developed a pretty serious case of PTSD and PPD and probably some other acronyms, too. One of the ways I combated my misery was to buy myself flowers every week.

You may want to sit down for this.

I know, I know, you’re shocked. Everyone always is, especially since I’m such an awkward cook and a poor excuse for a female, but it’s true. Gardening is one of my favorite things to do.

My daughter was born in January and my garden covered in thick Ass Cold Chicago snow so there was no way I’d be able to get outside and tend to my plants. Seeing those beautiful cut flowers every week cheered me up intensely.

One week, while at the grocery store about to select this week’s batch of flowers, I came across a mysterious-looking plant. (my first orchid as it is today)

Despite having roses that tower over me, I’d never tried to grow plants indoors, but at $15 – cheaper than the bouquets I normally bought – I figured I’d give it a shot.

But, like anything I set my mind to, rather than just enjoy that one orchid, I painstakingly researched the orchid family, learning about temperatures, light, and humidity levels. I poured over books, websites; anything I could get my grubby hands on.

I wasn’t going to grow orchids, I was going to Grow Orchids. Perhaps even Grow MotherFUCKING Orchids.

I started An Orchid Collection. Rather than buy cut flowers that would invariably die in a very stinky heap, instead, I combed hardware stores and greenhouses for these beautiful, exotic tropical plants.

Soon I had not one, not two, but a metric fuckton of orchids. 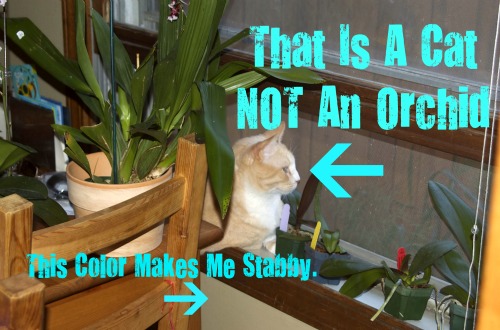 (This picture was taken a year and a half ago.)

In that year and a half, I learned more about orchids than any normal person should. In fact, I have grand plans to GO to an orchid show, but that’s mostly to see what kinds of people attend orchid shows. Are they like Dog Show People? I saw Best In Show, and I’m anxious to find out what Orchid People are like.

Believe me, I’ll take ridiculous pictures and show you.

After my painstaking research, I realized that I needed More Light. I had The Daver build me a Light Box, which meant ANOTHER trip to the Hardware Store for Grow Lights and various other things. You know what MOST people use Grow Lights for, right?

The cashier looked at me and giggled as he rang up my lights. Like, “I can’t believe this lady grows The Pot.”

But I AM a bit, uh, compulsive, so I kept buying orchids. (you shut your whore mouth) 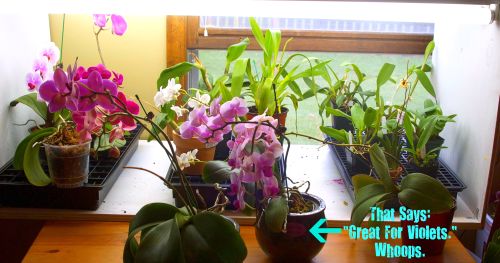 (those are the same orchids today)

Soon I outgrew the lightbox and started a second table of orchids.

Earlier this week, for my second table of orchids, I bought another Grow Lamp. And since we all know what Grow Lamps are REALLY for, and because the Grow Lamps are sitting in front of my windows, I know one thing:

It’s only a matter of TIME before the FBI breaks down my door, looking for my Mary-J stash.

Man, won’t THEY be disappointed. Maybe I should bake them a cake. 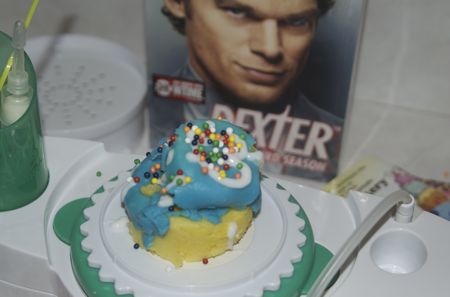 On second thought, maybe not.

86 thoughts on “If I Wasn’t On The FBI’s Radar For Shopping In The Serial Killer Section Of The Hardware Store, I Certainly Am Now”