Or, I should say, I don’t make GOOD lists. Every time I get overwhelmed by the sheer amount of dancing cactus videos on YouTube, I tell one of my Type-A friends that I am overwhelmed by the volume of dancing cactus videos. Rather than simply GO THROUGH THEM ALL AND TELL ME WHICH ONES ARE GOOD (in spreadsheet form, natch), they say the same words. ALWAYS the same words.

And every time, I’m all, “these are Type A people – they have color-coding and highlighters – they MUST know what they’re talking about.”

Then I realize that I’ve spent 46 minutes making a list that’s now stressing me out because, well, THAT’S A LOT OF SHIT TO DO, I’D RATHER JUST DO IT AND NOT HAVE TO STOP AND WRITE IT DOWN, THANK YOU TYPE-A PEOPLE.

I rip up my lame-ass list and roll my eyes any time anyone says the words “Type” and “A” together in a sentence. Because who wants to make lists? The same people who thrive off Post-It Notes. NOT SANE PEOPLE.

I woke up this morning and realized I wanted to make a list. Not a “life list,” (life list is apparently pretentious hipster-speak for being able to write things like, “climb the summit of a tall mountain wearing my Northface Jacket” and “drink fine wine on the backs of starving children.”) because those are lame, but a list of things I’d like to do someday, but, through the actual act of living a life in which every time I make a “plan,” things go horribly awry, so I’ll probably never get to do. Ever.

(Unfair Jab at Pretentious Hipsters: But hey, at least I’m good with straight-up iodized salt rather than sea salt carefully culled from the bottom of the dead sea, then breathed upon by unicorns until it made it’s way onto my $145 dollar entree.)

Return a movie on time to Blockbuster

Eat chocolate cake in the bath in a poufy dress

Use a Post-It note successfully – not just for lobbing insults in adorable wee form.

Buy all items on this screen AT ONCE 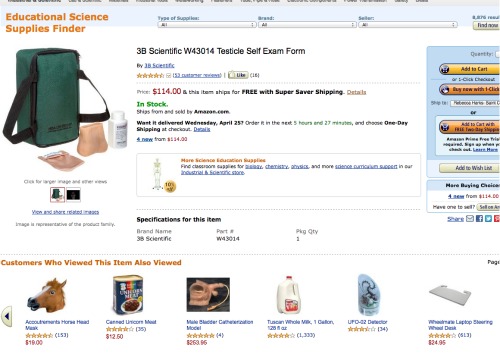 Especially the testicles. Because obviously.

Figure out why the hell someone made a testicle self-exam kit.

Figure out why a testicle self-exam kit costs $114

Inform everyone I know that this, in fact, is what I want for my birthday

Become BFF with Tom from Myspace. That dude was EVERYBODY’S friend.

Figure out what happened to Justin Timberlake, you know, the guy who started Napster?

Punch someone while they’re in the middle of their “If you can dream it, you can DO it,” speech. BECAUSE I HAD A DREAM TOO, MOTHERFUCKER, AND IT’S BEEN RUINED.

Admit that I haven’t actually HAD a dream to ruin, so there’s that.

Get three stars on an Angry Birds level so that I can do a victory dance, tell The Twitter, then realize how lame I’ve become.

Meet someone from Delaware IN THE FLESH.

Become a real-life troll, and stand in the middle of The Target yelling “You’re fat!” and “You’re ugly!” until I am arrested.

Take the Route 66 road-trip through the States. With or without Mark Zuckerberg as my copilot.

Get UN-raptured because Heaven is Bullshit.

Wear my Shut Your Whore Mouth to a Middle School Function.

Figure out what the hell Stumble Upon actually does.

What do YOU want to do, Pranksters? Alternately, what do you think *I* should do?