By the time I arrived in Maryland, I’d already been in the airport for what seemed like eleventy-billion years. Before I arrived – just as I arrived at the airport – my 9AM flight had been bumped to 11AM and I was set to miss my connecting flight. By a long mile.

It appeared, though, that fortune was about to favor the really stupid as I charmed the lady from US Airways into moving me to a straight-through flight from Chicago to Maryland. This was no small victory.

My day seemed as though nothing, save for sitting at the airport terminal for three hours, could touch it. I was invincible. I was brilliant. I was about to take the ride of my life.

And then, my friend Nic picked me up from the Maryland airport, new copy of SkyMall happily in hand, and we went out to lunch. Then? My day just got a hell of a lot awesomer. Because I found THIS: 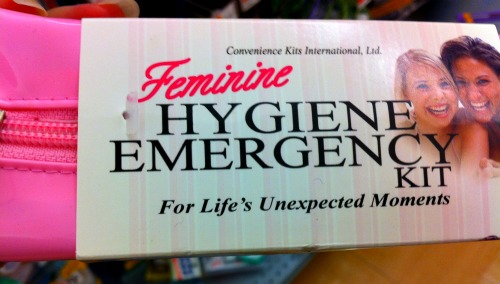 For 5 bucks, I too, could have a kit for all of life’s unexpected moments. Eagerly, I wondered what could be in this quixotic pink case. A light saber? A NEW copy of SkyMall? A billion dollars? A unicorn on roller skates? I simply couldn’t guess.

I was understandably depressed to learn that all this brilliantly pink case contained was some tampons. Like one. Not even a CONDOM or a copy of “Your STD and You.”

After leaving the sad pink case behind, Nic prepared to drop me off at my hotel when we saw this: 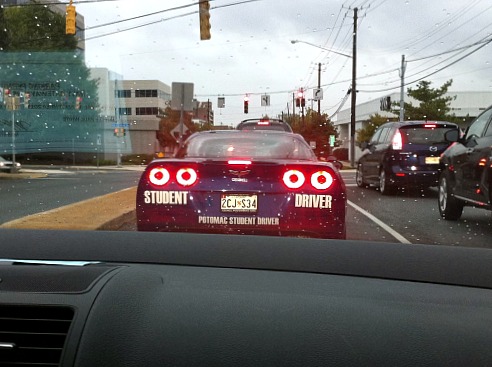 And then I spent the rest of the weekend confused.

I drove a shitballs Ford something or another that was probably manufactured well before I was born to learn to drive. And in Maryland they allow – nay ENCOURAGE – students to learn to drive on a Corvette?

I considered jacking the student driver, but I was suitably underwhelmed by Maryland and figured I probably didn’t need to spend the next 8-10 years there in jail. Better to be busted for something in Chicago, where my “mob” connections might land me a really spiffy cell.

The rest of the weekend was spent moaning in a dark bedroom. Migraine. It appeared that Maryland didn’t agree with me.

On the flight home, I got stuck in some southern backwoods airport for an extra hour. An hour I blissfully listened to a couple near me fight about The Bears and a drunken guy loudly complain about people from Chicago. I’d have knifed him with a homemade shiv, but I left my toothbrush at the hotel.

When I finally stopped laughing, I opened my eyes and saw this: something so magical I so as to evoke tears in my hardened heart. Something so magnificent as to require photographic evidence, if only to document that such a time was really, really, really real: 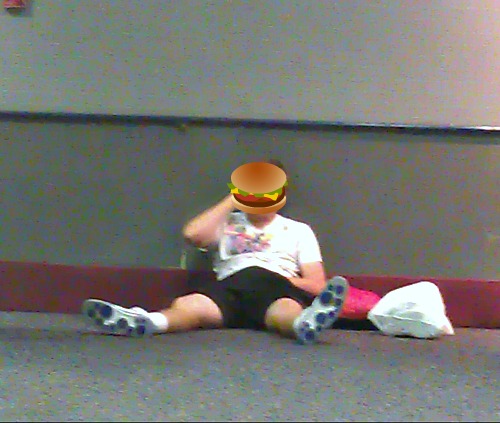 If you, Pranksters, are not weeping at the sight of a man, vigorously playing with his testicles while loudly on the phone with someone, well, your heart is more hardened than even mine.

And so, with a quick tug on his penis, this guy made certain that my trip to Maryland, was, for a moment, perfect.