I’m not entirely certain, since during the closing I said maybe one word to these people (that word, was “hello.” But I sadly did not follow it up with a “is it meeee you’re looking foooor?”) but I think that the people we bought our house from sort-of half-flipped houses. At the very least, they finished the basement and put in a whirlpool.

They weren’t here long, 2-4 years, depending upon if you ask The Daver or Yours Truly, but the people who lived here before them were. And they loved this house, much like we do.

Carefully, they landscaped the front of the house, filling it with lilacs, 2 rhododendrons, 4 evergreens, an amur maple, some bridal bushes and a handful of unidentified bushes. I’m sure that their visions were absolutely lovely and well thought out.

Because we inherited a nightmare of epic proportions: in lieu of real flowers, we had plastic flowers both planted and strung through the trellis of our privacy screen.

With 2 feet of snow on the ground, we still had unidentifiable gaily colored stalks peeking up, oblivious to their inappropriateness.

Spring came and I noticed that I had a rose bush that was so overgrown that it literally towered over us. And no, for those rose aficionados out there, it was neither climbing or rambling (also, if you heart roses, will you be my BFF?). The bridal bushes hadn’t touched in years and easily reached into my neighbors lawn where they could have easily poked someone’s eyeball out.

The snowball bushes, carefully planted around the air conditioner unit to reduce the unsightliness of it had overgrown it so thoroughly that I couldn’t imagine the efficiency of the unit without shuddering.

And the front of my house, once rife with small, neatly trimmed bushes, now makes my house appear as though a recluse lives here. A CREEPY recluse. (I am not a recluse. I just opt to not go out with all of my children if I have a choice)(wouldn’t you?)

In a stunning fit of brilliance, unmatched since the day I decided to get my name on a belt (wait, no, that was AWESOME) I decided this year to prune the ever-loving shit out of my lilacs and my rhododendron. Smart move.

Because my bushes (heh) are now growing like hell and not helping the There Must Be A Murder Living There overall vibe of my house. This is apparently what happens when one takes a blade to plants: it makes them want to grow MORE.

Also not helping is my Ash tree, which, my pleas to the city to cut it back some have been sorely unanswered. Stupid Emerald Ash Boner Borer Boner

So, I’ve got a Master Plan.

It (freakishly) involves a chainsaw and the removal of at least 6, more like 8, bushes. OH, and a fucking mess of ground cover. Basically, it’ll be one of those things where Dave will sit in the house at the window, phone in hand, dial 9 and 1 and wait for the screams before he dials the next 1. There’s no doubt that this will end up with some missing digits but hopefully not limbs.

There is no doubt in my mind that this is a Bad, Bad Idea, but thankfully, it will have to wait until spring.

Because even though I know that I need to remove this stuff, I have absolutely no idea what to replace it all with. Thankfully, I have many months to painstakingly research whatever it is that I decide upon. It’s mostly shade (thank YOU Ash tree for casting such a shadow on my house) and I don’t know a lot about shade-a-philic plants. 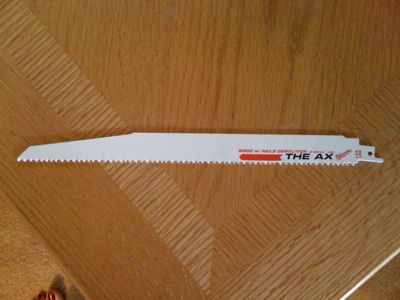 The likely instrument of my demise. An unused saw blade, waiting, just waiting for me to get stupid enough to think that this a bright idea RIGHT NOW.

…..so who wants to come watch*? I should sell tickets to this event: Watch Aunt Becky Mangle Herself, extra if you want to film videos of it to put on YouTube later.

*By watch, of course, I mean that you’ll have to do most of the work while I sit in a lounge chair directing you while I sip a nice cold mojito. What’s not to love?

(also, I would like to beg you to go over to that box thingy on my sidebar and vote for me if you would, please o! please? I’m pretty sure I’m being spanked by a coupon blog now and that makes me feel sad inside. SAD, Internet.)

60 thoughts on “I Guess That The Best That I Can Hope Is That It’s One Of The Fingers I Use Least.”