I didn’t tell you about it because it’s hard to talk about autism on my blog because there’s always someone whose best friend’s sister’s boyfriend’s girlfriend knows this guy who knows this girl who knows this kid who has this brother who has autism, too. And SHE heard that removing gluten AND standing on his head for sixteen hours a day made him normal again.

That’s awesome for that family, truly, I’m happy. But like any other condition, there’s a million different variations and this is MY kid we’re talking about here and this is our story. And, I should add, I DO want to hear about your children and your stories, Pranksters. I do. I promise.

Why, Aunt Becky, did your son run away? I can hear you practically screaming at the computer monitor, cup of coffee clenched in your hand as you shiver with antici…..

The answer is: I don’t know. HE doesn’t know. All I know is that he decided, upon returning from my mother’s house where he had been spending the morning while I worked, that my (technically also his) house was bullshit and he’d rather not come home and so he took off.

His brother informed me, “Ben ran away,” and assuming Ben had just stomped off to his room, I wasn’t terribly worried.

Until I couldn’t find him in his room, slouched petulantly in either car, holed up in the basement reading a book or lurking around the exterior of my house.

It was then that the blind panic set in. I drove down the street, the bitter taste of adrenaline coating the back of my tongue, as I looked left and right, hoping to spot my son somewhere; anywhere.

I found him, his mop of dark hair a stark contrast to the white snow, a body all elbows and knees, trying to cross a busy road at the edge of my subdivision.

I pulled over and hollered at him to get into the car, and he did. He peered sheepishly at me through eyelashes as long as his sisters as he buckled his seat belt.

For once, I was at a loss for words. I just gaped at him.

I drove us home and still, I said nothing. I didn’t even know what to say any more. I knew where he was going and why. I know my son well.

Rejection started when he was born. I waddled into the birthing room as one and a mere twenty-four hours later, we were two. The nurse helped me get him to my breast, and I swear I’ve never seen a more pissed off baby. He launched his gigantic head atop that tiny neck backwards, nearly toppling off me, clearly disgusted that someone might even SUGGEST such an uncivilized thing as BREASTFEEDING.

Breastfeeding didn’t work. Bottle-feeding only worked if I didn’t hold him. I’d put him in his bouncy seat and sit next to him, holding his bottle as he watched anything but me. The guilt was tremendous. Maybe Ben sensed my inherent evil or something.

My mother didn’t help. “I’d NEVER let a baby sit on the floor while taking a bottle,” she’d say to me as I fed my child. But I’d already tried to cuddle him closely, only to have him scream like I’d poured molten steel on him. Maybe she’d never let her baby lay on the floor to feed him, but Ben was not her baby.

The older he got, the worse I felt. The pain was exquisite. It was compounded when I enrolled in school full-time to earn my nursing degree while working part-time as a waitress/bartender over the weekends as I didn’t see my son much.

I, however, cared very, very much.

My heart shattered each time I’d stop and think about The Situation With My Son Ben. I was rearranging my life for this tiny boy with a shock of black hair so thick it looked like a wig and he hated me.

These were the days, you must remember, that autism was not commonly discussed. No one walked, ran, drove, pledged, or otherwise attempted a “cure.” ASD, PDD, SPD weren’t on the lips of every mini-van driving soccer mom. In 2003, when Ben was diagnosed at age two, I was on my own.

I was also relieved by that diagnosis. Autism.

The concept of autism didn’t send me reeling, I guess, because I’d already been reeling for so long. Knowing all that rejection wasn’t because I was an evil soul-sucking wench of a mother was such a relief that I cried. Then I stopped making it about me and got my kid into therapy. Loads of it.

Autism is, after all, just a diagnosis. And a diagnosis is just a word. I wasn’t going to let that word rule my life. 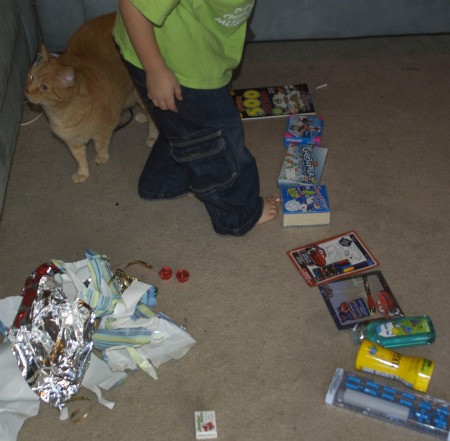 The pain of rejection, though, that never seems to go away. I love my son just as he is with every inch of my heart. I always will.

I sat there, my heart hurting and my hands numb from the cold as I drove the two of us home last week. I sat at my computer trying to eek out a half-hearted Christmas post, forcing jollity out of my fingertips. I sat there trying to pretend I was okay, that the pangs of rejection didn’t burn brightly in my chest, and I remembered that sometimes, as my throat burned with threatened tears, it’s okay not to know how I feel.

It’s okay to wish that it was all different somehow.

Then, my first son, Ben, without whom I would be nothing, approaches me with open arms and says, “I love you, Mom,” and I know that even if I never understand any of it, it’s all just as it should be. And that has to be enough.