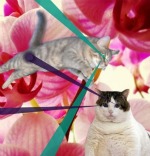 First of all, you rock.  I hate feeling like I’m being a whiner, since I know so many other people are going through hardships worse than mine.

But here’s my current crapola.  I have gone through a layoff, drained my savings, and been struggling to make ends meet since last summer.  I also battle depression, so when multiple areas of my life start crumbling, I have a really hard time coping.

I had a best friend that I’ve known for 14 years who has apparently decided to cut me out of her life.  I have attempted to contact her to no avail. I know I haven’t done anything wrong, and I do have a lot of other great friends, but this one stings.  I don’t have a great relationship with my family, and she was always like the sister I didn’t have.

I have no clue what’s going on with her, but I really hate feeling like I suck because she has decided to not be my friend.  I know deep down it’s her issue, but how do I just shut down that big part of me that cares, and say “Whatever!” and move on?  I am the kind of person that takes situations like this to heart.

Any advice about how to stop letting my self-worth be dictated by others?

It’s tough to handle the break-up of a friendship no matter what the circumstances, and when a good friend stops talking to you out of the clear blue, closure is nearly impossible. It’s a rejection without the courtesy “thanks but no thanks; fuck you very much” letter. A breakup with a friend can be just as hard (if not harder) a breakup with a lover.

(I have decided “lover” is much awesomer than saying “life partner,” “husband,” “wife,” “boyfriend,” or “hostage.”)

When I was planning my wedding, I had two maids-of-honor, both my good friends. All of the bridesmaids met at the seamstresses house to get measured for the dresses I was forcing them to wear. One of my maids-of-honor had been a bit…off but I hadn’t thought much of it. We were both extremely busy.

I tried to get in touch with her a couple of days later and she didn’t answer her cell. I called back a the next day: no answer. Like me (back when I had a cell phone able to make and receive calls) she had her phone glued to her ear, so I knew she’d been getting the calls.

I haven’t seen her since.

It’s been six years and I still have no idea what happened. It also still sucks.

And I guess my rambly point is this: being dumped sucks. Being dumped by an old friend is worthy of feeling sad. Everyone feels like a loser when they’re dumped or rejected.

On the flip-side, maybe there’s something going on with her. Her own demons. The kinda stuff she needs to battle alone.

I wish you the best. When you’re feeling extra-sad, try to remember it really is her loss. Or buy a voodoo doll. Whatever.

The bushes in front of our house are pokey Barberry’s that were planted every-other-style in terms of color.  Obnoxious. How do I make them go away “on accident” so the spouse is none the wiser?

(in my best Clint Eastwood voice) I. HATE. BUSHES.

Shrubbery is my mortalest enemy. My house was way over-landscaped by the original owners because people in the 70’s loved full bushes (heh). The people we bought the house from did absolutely no maintenance on the yard, which meant that it looked like a serial killer lived here when I moved in.

I spent last summer digging out the 9474632 moldy, ancient, ugly bushes. Now, I’m guessing, I must find something to replace them with.

(IF YOU SAY “MORE BUSHES” I WILL CRAM THOSE BUSHES UP YOUR ASS.)

I’m going to make the assumption that you’re going to eventually have to dig out the roots, because, obviously, but here’s the best way to kill bushes that I know of.

Cut off some the branches waaaaaaaay at the bottom of the bush, closeish to the roots.

Then, spray that “open wound” of the bush with weed killer. I happen to use Weed-B-Gone. Mostly because I own some and am too busy adding cats shooting lasers out of their eyes to my pictures to go find anything else.

If you’re trying to stealthily remove (heh) shrubs, it may take you awhile to kill them if you don’t just whack (heh) the whole bush down (heh) and douse those fuckers with Weed-B-Gone. You may have to do it a couple of times to get it to work.

Or get a voodoo doll.

As always, Pranksters, pick up where I left off. Because I’m sure you have much sager advice than I do. (Obviously.)

Or get a voodoo doll.