Back when my first son was a baby, I had a real cat in addition to my fake cat, Mr. Sprinkles, and his name was Pete. Pete was probably clinically retarded, but I loved him anyway, and we had adventures like, ‘LET’S RUN INTO WALLS HEADFIRST’ and ‘LEGS, LET’S USE THEM!’

Oddly, now that I see that typed out, it was the same sort of adventures I had with Ben, but I digress. Badly.

Why they thought a retarded cat could kill a mouse is beyond me. I’m pretty sure any mouse that would die on his watch would have to have committed suicide.

But then, of course, they fell in love with Pete. Stupid old Pete, my companion. But, Sister Aunt Becky has more maternal sweetness in one of her cells than Your Aunt Becky does in her entire body, so when it came time to bring Pete back home, Pete already had amassed a collection of soft kitty blankies, toys and treats. In a week.

Suddenly, I felt sort of…guilty taking him back, where he’d be forced to sleep on my BED without treats, toys or the soft caress of cashmere cat blankies.

Many years later, I adopted a similar orange cat from the shelter because I am a creature of habit and also because I have no imagination. When I got him, I brought him home and loudly proclaimed that his name was….(wait for it)

And Pete II was possibly more simple-minded that Pete I.

Firstly, he used his head as a battering ram. Doors, windows, heads, walls, people, no matter what was in his way, he just bashed it with his head until it gave in or until he forgot what he was doing and decided to do something else.

Then, the moment he got happy, which was often, he’d start to salivate. Which was kind of funny, because you think, “hey, Aunt Becky, I drool when I see bacon!” but you know, the cat would drool when he saw ME. And since I LIVED WITH HIM, I was pretty much always cleaning up piles of cat drool. 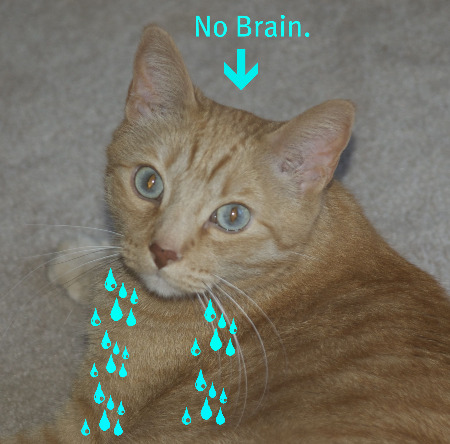 Well, then I popped out two back to back crotch parasites and Pete II’s four measly neurons couldn’t handle the stress of having to deal with the peeing and pooing of two additional small humans.

So he did what any mentally challenged cat would do: he started peeing on stuff. Anything.

I called up my sister-in-law and started pleading with her. Shockingly, she listened to my pathetic bribes and ended up coming to take Pete home with her because she is a better human being than I am.

Which meant that she had not one, but two of my fat, orange, stupid cats named Pete.

I really shouldn’t be allowed to do anything. Ever.

Further proof that I should probably be chained to a wall somewhere.

I made you a present. See, now The Internet is trying to get a role in this, uh (I think I have this right now) blogging reality show about, uh, bloggers? Well, this is why I SHOULDN’T be allowed on a reality show:

I made that! It’s new! It’s why I should NEVER be allowed near a video, uh, maker. Or YouTube, where I made a channel, so I can make NEW videos. (hide, Pranksters).

P.S. Now I feel like I should probably make more bad videos. This cannot possibly end well for anyone.