I’d reached the point where I was simply praying that my middle son was going to find a particularly nice young man to room with in college – the kind who didn’t mind occasionally changing my son’s diapers.

I mean, there was that crazy astronaut lady who drove across the country to kill her lover’s wife or something WHILE WEARING ADULT DIAPERS. Clearly, there’s a market for that stuff. And clearly, my kid was going to join into that market.

Either way, I’d resigned myself to it. It was that, or pull my hair out one by ever-loving one until I had a bald spot the shape of Alaska on my previously hair-covered scalp.

So yesterday, still sick as a motherfucker, I tried again with the potty training. As my son admired the tiny Lego Hogwarts that The Guy on my Couch (who firmly believes he will no longer be known as The Guy On My Couch once he does not, in fact, live on my couch) had lovingly put together, Alex asked to play with it.

As The Guy On My Couch tried to pick up his jaw from the floor (one does not, it appears, play with The Guy On The Couches Lego sets), where it was handily collecting cat hair, I seized the opportunity:

“I will buy you that set AND have Big Ben put it together with you, Alex.”

His eyes opened as wide as saucers as he looked at me. He’s too young to know that statements like that are always followed by a rather unpleasant, “if…”

“No.” There was no room for argument. Guess that wasn’t the currency the kid wanted to dabble in.

“Okay, if you poop in the potty,” he giggled as I continued. The word “poop” is always cause for much ruckus and merry making in my house. “I will take you to Chuck E Cheese TODAY.”

I’d been promising them a trip there as AMELIA had already dropped her deuce in the shitter – but I was going to hold off until whatever bug is currently eating away at my soul decided that my feeble immune system was actually going to kill it. Going to a Chuck E Cheese on a Sunday is worse than waxing the cat or picking out stray pubes one at a time with a pair of tweezers.

His siblings, also in the room with me, chimed in, all pressing the kid to take a shit on the crapper. After a couple minutes, an overwrought Alex protested so loudly that we all stopped and then went about our day (read: tried to stave off a headache, while the banshees chased each other about). My eldest, Ben, continued pressing his brother.

The whole house erupted into cheers as the small ones scurried to find pants to wear to Mouse Hell, Where A Parent Is Reminded To Take Her Birth Control, to eat Mouse pizza.

Ears still ringing from the sounds of Mouse Hell, I looked at Dave sheepishly, as we pulled into the toy store after our hour in Mouse Hell (happily, I noted, firearms are not allowed there), and shrugged. I had promised the kid a zillion hundred dollar Lego kit.

“Me either,” The Daver replied.

And that is how Your Aunt Becky learned to never, ever bribe a kid – no matter how unlikely it is that aforementioned child will actually perform a feat.

Turns out, I am as stupid as I look. 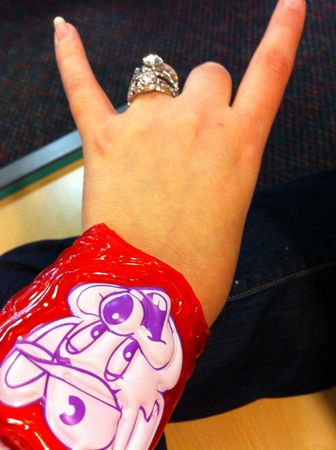 How was YOUR weekend, Pranksters?

(I have to apologize – I’d been planning to start writing my Go Ask Aunt Becky column again – I have plenty of questions, but I was beyond sick on Saturday)

26 thoughts on “Further Proof That I Am, In Fact, As Stupid As I Look”