I wanted to say thank you to all of you who read my post yesterday about anxiety and commented and emailed and stuff. It’s a weird thing for me to be dealing with, and I’m not sure how exactly to handle it. Anxiety, that is, not blogging, because, hell, I’ve been blogging so long that dust comes out of my fingers when I type.

I’m fortunate enough to have a doctor who is quite possibly the World’s Greatest Person. Like, I know I’m constantly giving the Nobel Prize for Awesome out to random things, like the guy who invented the bacon cheeseburger, and the person who made this picture: 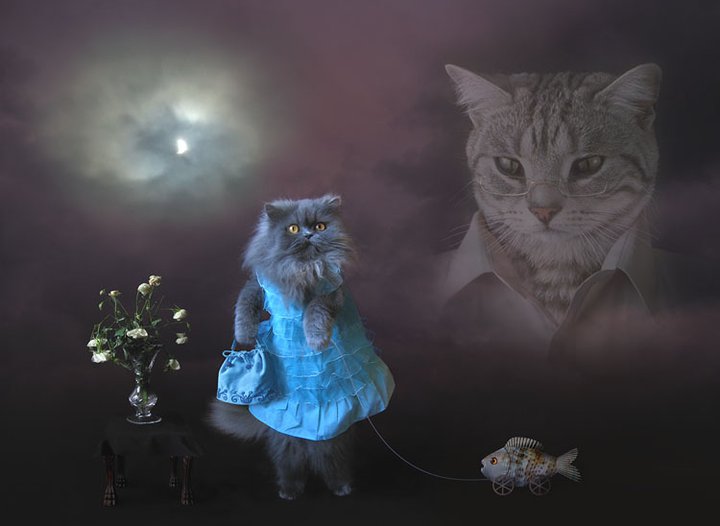 If you don’t think that’s the greatest picture ever, I will fight you.

My doctor deserves the medal for Awesomest Doctor Ever.

Getting help made me I realize how long I’ve been pretending that everything was okay when it was not. Problems are bullshit. Denial is a bigger pile of bullshit.

The first order of business is to start thinking like an editor. I’m cutting out any excess [words] noise. Getting rid of everything I no longer require (I wrote about that on Curvy Girls). Literally and figuratively (when in doubt, throw around big words and hope you’re using them properly).

Then? Organization, Pranksters. After, of course, many hours of snow cone eating and dancing cactus videos.

I realized I’d forgotten to announce The Winner for the Shut Your Whore Mouth Shirt Contest yesterday, but by the time I realized it, I’d already put up my post about being all anxious. It seemed so vastly incongruent to be all After School Special, “Pranksters, I’m struggling and anxious,” then, OHMYGOD, WINNER! #UNICORNBLOOD trumps #TIGERBLOOD! 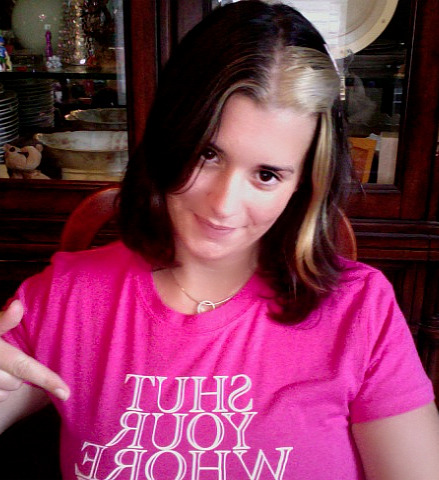 But today, in a completely random post, I can announce it.

QCMAMA, come on down! You just won a Shut Your Whore Mouth Shirt! (soon to be available in PURPLE)

This seems like an excellent time to tell you about Robert, the Worst Date of My Life.

Remember when coffee shops were like the new black and suddenly, they sprung up every-fucking-where? This was after that. One of my good friends worked at a coffee shop attached to a small, local video store, in one of those combinations that seemed like a good idea, but really wasn’t. One of his coworkers was a guy named Robert, and I should have known by his foppy haircut that he was Bad News for someone Like Me.

But, I was between boyfriends and when he asked me on an actual date, (I had boyfriends, not actual “dates,”) I accepted. What’s the worst that could possibly happen? I reasoned, even after uncomfortably noting his extremely well-manicured fingernails and soft palms.

Robert, it seemed, was the worst that could happen.

The night of Our Date, I met him at the coffee shop and he chivalrously offered to drive to the multi-theater complex located a good 45 minutes away. Okay, I thought, anyone with hands like that was probably not a rapist or axe-murderer.

Robert was of a completely different ilk.

Now, I’m all for a guy who likes to talk about His Feelings without the use of hand-puppets and other props, but Robert took things to a whole new level. A whole new level that made me so uncomfortable that, had we not been in a car on the highway, I might have had him pull over so that I could show my own feelings. Vomity-type feelings.

In that 45 minutes, I learned this: Robert was 22 (I was 18) and lived at home with his mother. He’d had a long-term girlfriend who he’d recently broken up with because she’d moved away to be a part of some traveling Renaissance Faire and he couldn’t handle the distance. They’d tried, he informed me, and his mom was pretty mad at him because they’d racked up massive phone bills.

Apparently, Robert’s answer to being so far apart was to spend each night on the phone, sleeping together.

You read that right.

They “slept” together. On the phone. Listening to each other snore.

I’ll wait while you vomit.

I appreciate romance as much as the next person, but that’s just plain old creepy.

He waxed on and on about his ex for the entire car ride. Clearly, he was not only co-dependent, but also still not over her. Ugh. By the time we arrived at the movie theater, I was ready to go see a movie – any movie – by myself. But, no. Cell phones were still relatively new, weighed about 6 pounds, and cost hundreds of dollars to own. I had a snazzy gold beeper instead.

Snazzy wasn’t about to get me away from Creepy Robert.

So, before we went into the movie of his choosing, I insisted he buy me the biggest vat of popcorn they had and a bucket of Diet Coke and some Junior Mints, because, well, then the date wasn’t a total loss. I wasn’t normally the kind of girl who did such things, but I’d just spent 45 minutes listening to the virtues of Megan, The Most Wonderful Renaissance Princess Ever Who Also Played Dungeons and Dragons And blah, blah, fucking BLAH.

I considered this my tasty and delicious therapist’s fee.

I’d been too busy craning my neck around to see if I knew anyone who I could bum a ride home from to notice what movie Robert had chosen for us to see, but it was no surprise that he’d chosen the lamest movie ever: Ever After: A Cinderella Story.

Instead of focusing on the riveting plot (I’d have chosen a movie like Die Hard), I listed the Periodic Table of Elements in order my head: “Hydrogen, Helium, Lithium, Beryllium, Boron, Carbon…” Then, claiming “bathroom break,” I went into the lobby and played air-hockey with a couple of twelve-year olds.

When I came back, Robert was openly weeping.

Not at my absence or anything, but at the movie. Apparently, it was very touching and I had missed it! O! the humanity! O! the emoting! O! the beauty!

I took my seat next to him and he sobbed so loudly that people began to turn around in their seats to stare at him. Not a single other person in the theater was tearful, so I guess it hadn’t been that emotional.

I was mortified. I was with That Guy. I had no idea how to handle it.

So I patted his leg reassuringly and said, “There, There.”

They asked us to leave.

The entire ride home, he babbled about how “beautiful” and “true” that movie was. I just stared out the window, willing the ride to go by faster, wishing I’d worn a mask.

When we got back to my car, he professed his love to me. I suggested that he “rescue” his “true love” from the Ren Faire.

Then he called me so often that I had to block his number.

The Moral of This Story: Never, ever date a guy with soft palms.

43 thoughts on “Forever Yours, Randomly”