I was somewhere over Chicago when the drugs began to take hold.

Subterranean Homesick Blues squealed through my earphones and for a split second the airplane was submerged into complete darkness. I opened my mouth to shriek; to warn everyone that we’d reached the abyss and just as my vocal chords let out a squeak, warm color returned. My seatmate turned to me; he clearly hadn’t seen the black, and as I moved to explain that we’d hit the edge; there was no going back, when I realized that he’d see it all soon enough.

We were going to Las motherfucking Vegas.

I couldn’t explain myself properly at this altitude. Instead, I grinned a fake toothy smile, hoping it passed for the real deal, mumbled something about vodka and turned up the volume on my iPod, my eyes darting to the bag on the floor. It was filled with a dazzling array of uppers, downers, grass, cocaine, mescaline and some ether thrown in for good measure. The ether, for sure, was the hardest to procure. I wondered if I could get away with using some mid-flight.

As the plane touched down in McCaren Airport, my seatmate began to weep openly, which scared me. I don’t handle emotions and I knew the tears meant that he too was entering the abyss. 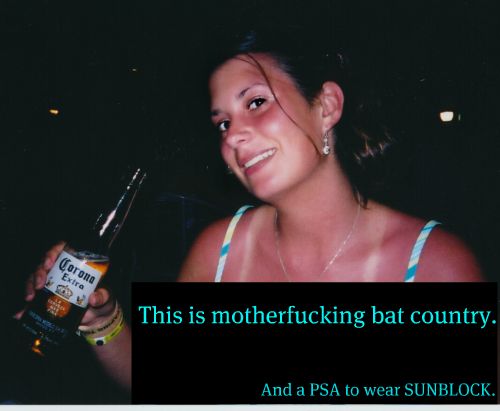 Email me if you’re going to be there so that we may swap phone numbers. Because we need to HANG OUT. Have no fear, I am no longer sunburned. In fact, I am pasty white. “Blinded By The Light,” white. BUTT ASS white. So you need not fear my redness. Only that I may make you act as my attorney. Which, DUH.

52 thoughts on “Fear And Pranksters In Las Vegas”