It may shock and sadden you, Pranksters, that I was once neither Your Aunt Becky nor a mother. It’s hard to believe, so I understand if you need a couple of minutes to compose yourself.

Approximately 383 sesquillion years ago, the girl who will be known as Your Aunt Becky went away to college. She packed all of her stuff into the back of her friend Scottie’s hot purple Neon and trundled off (very quickly) to college in the city. Loyola University Chicago, for those in the un-know.

Well, Loyola made a very, VERY grave error in judgement. They paired me with someone who I was so utterly unlike that it was a hot mess from the get go.

The first time I met my college roommate, she smelled like meat (she worked in a deli) which wasn’t too bad. What was too bad is that she was the most over-prepared person I’d met. If you know me, Pranksters, you know that I’m not exactly…*ahem* PREPARED. I’m not going to say that I fly by the seat of my pants because that’s not quite true, but I’m a definite Type B.

Sometimes (like in the case of Crys, Ben and Jana, my counterparts on Band Back Together), it works well. They can Type A me into submission whereas I can remind them that color-coding properly isn’t exactly a worthwhile investment of time.

But the true horror of my college roommate came to light when Scottie and I – both very drunk on vodka (which we were hilariously pronouncing with a very bad Russian accent) – moved my piles of crap into my room.

The door shut behind me, I looked at it to see that my roommate had decorated it. The quotes and the like weren’t exactly awful (albeit a little cornball). And there, in the middle of the door, it sat.

I literally died on the floor, laughing and crying. I mean, just, NO. We were 19, not 69. How was I gonna get laid with Grandma’s cartoons staring at me creepily?

It turned out, of course, that our relationship was not meant to be. She was too control-freak and I, well, I got knocked up and had to go home to pop out a crotch parasite. She meant well and all, but I couldn’t overlook the Family Circus crap. Could you?

(the answer should be a resounding no)(possibly a FUCK NO) 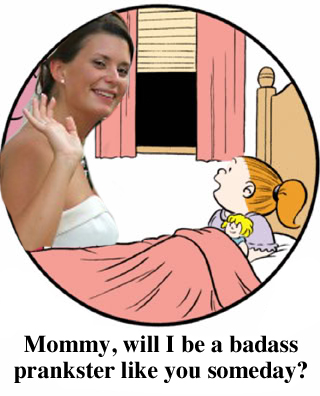 So thanks, Jason, for the flashbacks.

Now if you’ll excuse me, I’m off to vomit up what’s left of my breakfast.

Dish, Pranksters. Do you have any awesome roommate stories for Your Aunt Becky?

42 thoughts on “Family Circus of Horrors”