On my twentieth birthday, I celebrated by going out to the diner I was working at with my boyfriend and some friends. I remember feeling terribly sad because I’d just moved in with my boyfriend at the beginning of the month, and while I didn’t expect a huge fuss for my twentieth, he’d bought me 3 CD’s–one of them, he boasted, for a penny.

I worked 5 grueling days a week slinging plates of cheap breakfast food from 8 AM to 4PM, making roughly $400 a week. It was, my boyfriend often rubbed smugly in my face as I wearily rubbed my feet at night, the same thing he made sitting on his ass working the help desk. He’d laugh cruelly at the irony of it all.

I was confused by my life.

I’d dropped out of the college I’d been planning to go to for ages, I was now living with someone who I was pretty sure wasn’t who I thought he was, and my mother had taken to leaving me horrible, mean letters rather than talk to me. My life didn’t make sense any more.

But it was a new decade, I reminded myself, and I sadly blew out the candles on my birthday sundae as my boyfriend said, “they’d BETTER pay for that.”

My early twenties were kind of like that. Moments of sweetness marred by intense, searing  sorrow.

I walked into my twenties with an abusive boyfriend on my arm, and today I walk into my thirties with my three hilarious crotch parasites bounding along by my side. They remind me that life is all about bounding and rebounding.

Alex runs into walls and bounces off them, laughs, gets up, and then does it all again just to make me laugh. I cannot grimace at one of his particularly fragrant diapers without him trying to swoop me up in his spindly arms and remind me that he loves me more than anything else. Ever.

His sweetness is breathtaking. His sense of humor reminds me that everything is worth a good solid belly laugh.

Amelia painstakingly crawls up onto the couch, her cellulite-dimpled butt struggling with exertion, then, finally gets up there triumphantly, flashes a four-toothed grin, claps her hands and yells triumphantly, “AAAAAAAAYYYYY!” It’s expected, of course, that since we are all mere mortals in Queen Amelia’s Court, that we all chime in with applause and screams of “YAAAY!”

Her triumphs over the small things in life remind me that everything should be celebrated.

And Ben, Gentle, sweet Ben. Who is trying so hard to learn the things that come naturally to other people that it breaks my heart into a million pieces. Ben who is only good inside. Ben who is made of only sweetness and light.

Ben who reminds me that we can overcome anything so long as it is what the heart desires.

And who could forget The Daver? He may not be the one who “swooped me off the streets and rescued me from a life in The Gutter” like my parents think he did, but he’s about the kindest person I could ask for. I smile as he swoops my babies up in the air and laugh as they breathlessly scream with joy.

Dave reminds me that sometimes I should TRY on the rose colored glasses for size, even if I don’t wear them.

I’m no longer confused by my life.

A couple of weeks ago, it dawned on me that I’d been spending a hell of a lot of my time reacting to things rather than focusing on controlling the things I could. I was floundering in the water when I could have been handily doing the backstroke and Pranksters, that’s bullshit.

That’s been a hallmark of my twenties, that behavior, and frankly, I’m done, Pranksters. Certainly, life was chaos during these years, and the behavior is a learned one, but that’s done. I’m taking out my gigantic set of platinum-and-diamond-encrusted balls and I’m super-gluing them on.

It’s time to do the one thing I never managed to do in my twenties: get a career and make a name for myself (besides #1 Slore)(which, let’s be fair, is an awesome name).

Aunt Becky is back, world. Get ready. 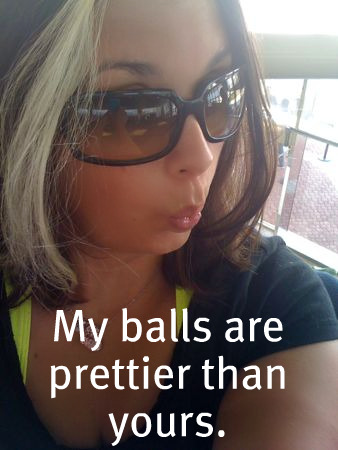 Thank you to everyone who gave me advice on Mushroom Printing, the new group blog. Been working my ass off on setting it up (also added CommentLuv and Comment RSS here, too!). Is there anything else I should add on my blog?

PLEASE, keep the advice rolling in. I don’t read any other community blogs and I want to make ours full of the awesome. Because, obviously.

And, uh, thank you for everyone who voted for me for this, uh, award I didn’t even know about but won:

Suzy and I decided it means we got our very own MBA now, so, rad. We’re business people now, Pranksters!

And as soon as I remember my login, I’m voting for Suzy for Best Humor Blog:

Because I’m up for Hottest Mommy Blogger (which means they DID NOT see the balls picture above)(heh):