In college, I had to take what I called, “Bible Class” and it was the first time I actually cracked open the Bible. Well, other than the times I read aloud random passages from the hotel rooms I was staying in (much, I should add, to the chagrin to whomever I happened to be staying with). Thank you I say now, oh wily Gideon’s, for supplying me with Bibles to read from to annoy my fellow travelers with.

I read the book cover to cover and learned a lot about what the rest of the religious world was talking about. Things that most of you probably just inherently knew, but for someone like me who grew up saying “Good food, good meat, good God, let’s eat” as a bastardized version of Grace, I simply was flabbergasted. There really is, I should add now, no fucking separation of church and state.

Anyway. I married someone who grew up in a family who is so religious that they’re probably still reeling from the PTSD from meeting me and finding out that yes, their son loves a heathen.

For Ash Wednesday one year, I was working on the floor and the pastor happened to be walking around giving out the cross on the forehead, and in the name of Trying Something New, I had decided to give up using “fuck” for Lent. It should go without saying that I am not Catholic, but I was reading the Bible and figured that it was a good idea to TRY it out.

The Daver: “What’s on your forehead?”

The Daver: “You know that means you can’t say it, right?”

The Daver: “Just go to the religious store in town and get her something.”

Aunt Becky: “I’m going to go and get her a gigantic crucifix.”

Aunt Becky: “Like a gigantic BLEEDING crucifix for them to hang in her room.”

Aunt Becky: “I want it to have like realistic blood and everything. I’m thinking something in the market of…8 feet tall and 6 feet wide. That should take up at least part of the wall of the nursery.”

The Daver: “Becky, that’s not funny.”

Aunt Becky: “Maybe they can hang it over her bassinet! To keep out The Devil. I think it would be lovely to watch over her.”

The Daver: “Becky, that’s really not funny at all.”

Aunt Becky: “Neither is sending me into a religious store. I don’t know FUCK about this shit, Dave. Besides, YOU are the Godfather, not me. Also, YOU are the heavenly one.”

Aunt Becky: “Do you think this sort of crucifix is a custom job?”

(ed note: Dave didn’t speak to me for an entire week. Also, I bought the kid a nice bracelet with a tasteful non-gory cross on it.)

What religion will Aunt Becky mess up next?

It’s like Where In The World Is Carmen Sandiego? except with RELIGION.

Anyway, in order to redeem myself, I made YOU, my Pranksters, some new cards for Easter. I think there are also some other ones in my Love, Aunt Becky line on my sidebar. Feel free to take as you see fit because I am a giver. 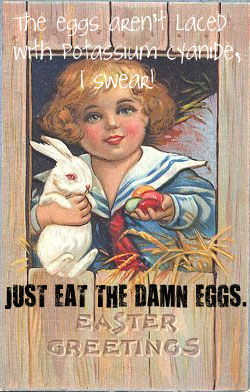 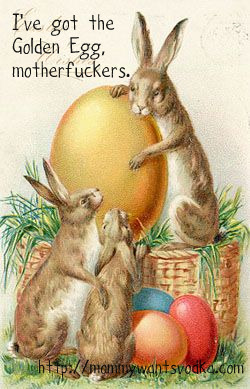 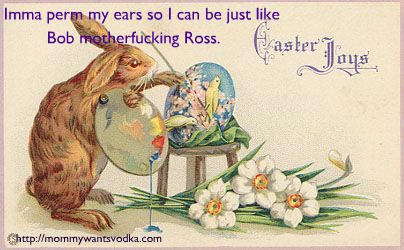 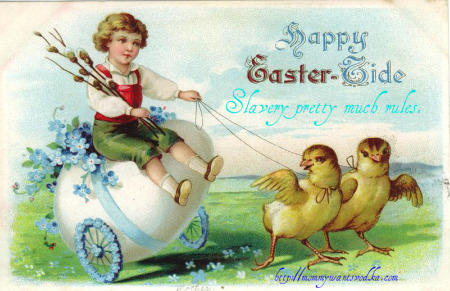 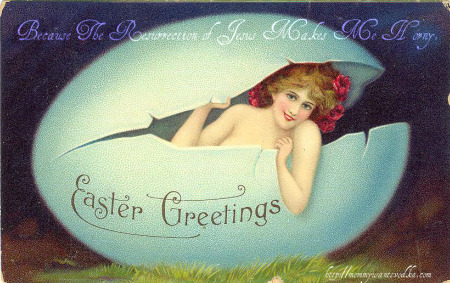 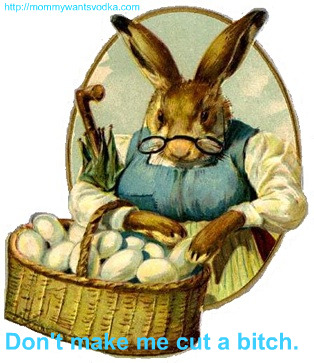 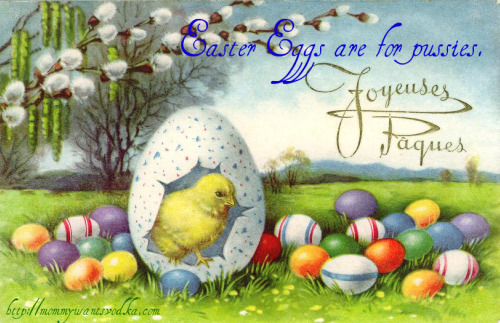 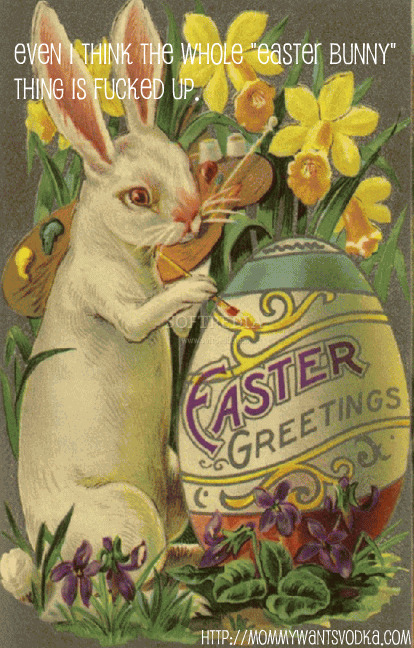 221 thoughts on “Easter, According To Aunt Becky”