(I am pretty sure that you guys built The Daver up so thoroughly that he’s going to be fighting me tooth and nail to guest post on my blog. Which, hi, AWESOME. Except he’s WAY NICER than I am, so there’s that. Maybe I’ll make him blog on Saturdays for me after he’s done rubbing my feet and giving me a manicure and washing the floor with his tongue except OH WAIT HAHAHAHAHA!

That’s right, he barely posts on HIS BLOG!

If you bug him enough, maybe he’ll post here.)

Christmas in my house growing up was always a pretty understated affair. A simple candle in each window, popcorn and cranberries hung on the tree and tasteful ornaments hung just-so on the freshly-chopped-down-ourselves tree. It drove me bonkers.

If I’d had it my way, Christmas would have vomited all over my house, spewing tinsel and garland from floor to ceiling, the more, the tackier, the blinkier, the better. I admired the displays in the stores with something akin to lust as my mother pulled me through, always calling my choices “tacky.”

The one year that I saved up my allowance, snuck off to the store and bought tinsel to decorate the tree with overnight, she was FURIOUS. Partially because it was “hideous” but mainly because our stupid cats ate the tinsel and dragged cat turds around the house dangling from their buttholes like homemade garland.

It was fucking hilarious.

Watching her chase our indignant and semi-retarded cats around the house pulling those strands of poo garland out of their poo holes, man, that was comedy gold. Consider that mental picture my Hanukkah gift to YOU.

As I got older and started to have to decorate for Christmas ourselves, we’ve toed the line between broke-as-shit and we-don’t-give-a-shit. I’m not a huge holiday decorator anyway, because that would imply that I’m some sort of decorator in the first place, which is something I’m going to have to eventually hire someone for. I have no eye. I’ll have to pay to use another person’s eye.

My sweet Blue Christmas Tree that they will have to pry out of my cold, dead hands. I got it from my sister-in-law’s mother, and it’s a vintage aluminum white tree. Fuck to the YES:

And then your standard fresh Christmas tree with the hokey ornaments. Generally without garland and always with the garish plastic balls. We have small kids, puppies and, well, The Daver. OBVIOUSLY. I’m pretty okay with fake everything else (read: boob job) but I’m insistent on the real tree.

This year we also have Mimi, who is a crawling machine that likes to chew on everything from dog food to batteries and, well, we decided that maybe a real tree or a tree that was made in 1960 was perhaps a bad idea.

I considered trying to put one of my orchids on the floor, but then realized that no one was going to sing, O! Christmas Orchid and besides, I love my orchids too much to put them on the floor. I DO have priorities. Then I thought that maybe I could dress up one of the kids as a tree and they could rotate who had to Play Tree today, but I realized that that was probably torturing them more than was necessary, so I scrapped that idea too.

Eventually, Dave and I came to the conclusion that the only way to do this was to buy another fake tree that wasn’t dripping with lead paint and other combustible radioactive bits for our baby to eat. So we did. We bought a cheap fake tree and all the garland I could find (except that I totally didn’t buy enough*) as well as some glittery snowflakes that didn’t require those metal hooks that were certain to pierce my daughter’s colon after she ate them.

The final result, well let’s just say that no drag queen will ever speak to me again, but my younger self is beaming proudly: 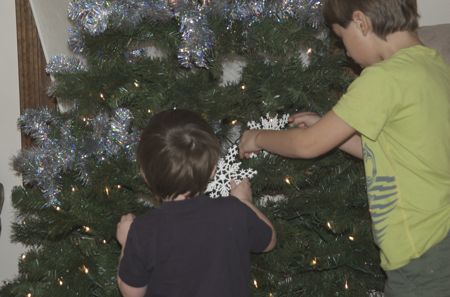 My children had a freaking BLAST decorating it, and what you cannot see is my daughter climbing around underneath it like a monkey. She was probably looking for an electrical cord to munch on or some plutonium to make a bomb from. 1.21 GIGWATTS! **

Better than the tree, though, is wrapping paper. New parents, HEED MY WORDS, AND HEED THEM WELL: IF YOU WANT TO BUY TOYS FOR YOUR CHILDREN, GO AHEAD, BUT THEY ARE MOSTLY FOR YOU. CHILDREN PLAY WITH RANDOM THINGS.

For example, rather than toys, my children will be seen playing happily with:

*A Bag Of Straws (not even the wrapped ones!)

*Wrapping Paper (and not even the fancy ornamental pretty stuff!)

Yes, I know, Aunt Becky just ruined your Christmas. Sorry. You can return those gifts and buy yourself stuff. Or better yet, send ME the money! YAY! 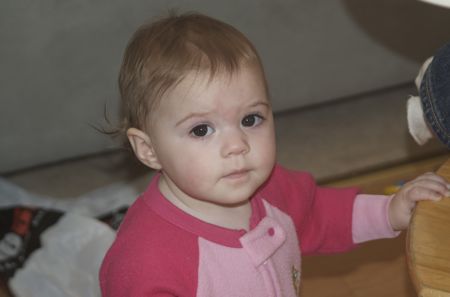 Amelia says, “Mom, if that’s so true, why the hell do you have a stockpile of crap for us upstairs?”

THAT DAMN BABY IS A MIND READER.

**WTF am I talking about?