I am not a crafty person. 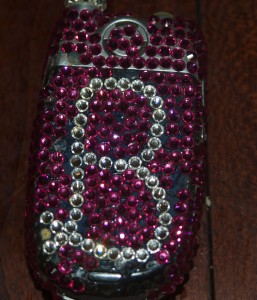 Yes, yes I made that. And I wasn’t trying to suck AT ALL.

I know, understatement of the year, right? (why I just joined Pintrest is beyond me – prolly so I can feel bad about myself MORE often)

That’s why it’s beyond me why I decided to do a themed birthday party. Frankly, I could’ve just thrown a few bottles of vodka and a couple of shitty take-out pizza boxes out and called it a day and everyone would’ve been all, “sweet ass.” But no. I had to renovate my fucking house.

Then I had the brilliant idea to do a CandyLand themed birthday party. Seems simple right? A couple of bags of fucking candy WITH some pizza and beer.

Not so much. Because I turned to Google and was all, SHOW ME YER CANDY THEMED PARTIES. And then I cried. Because they were so awesome and I couldn’t recreate that kind of awesome without the aid of the Lollipop Kids. And it turns out, the Lollipop Kids are like dead now.

So I decided that a generic Sweet Shoppe themed party (oh yes, I went there with the “e” on Shop) would a) be adorable and 2) be easy.

Lollipop trees? I figured I’d be able to quickly throw some balls on a stick and poke suckers into them. Turns out? You need a fuckton of lollipops. I’m pretty sure the guy at Party City thinks I’m now a hoarder – of lollipops. I keep coming in to buy more. Turns out that lollipop topiaries take about a hundred zillion lollipops. 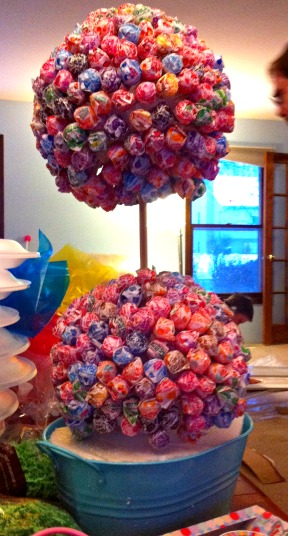 And the garland I’ve decided to make out of Froot Loops and twine? The sugar dust that is now coating my house is slowly turning me into a diabetic. 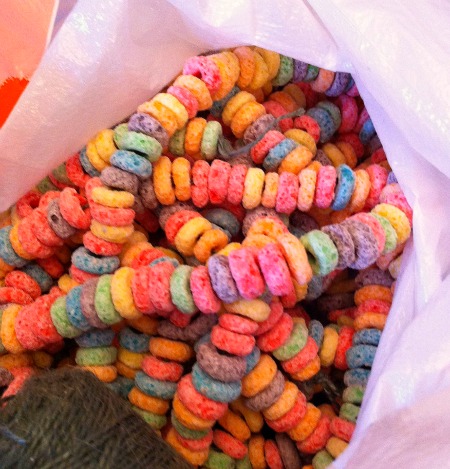 I sure hope my kid appreciates her party. Thanks to my new Type 2 Diabeetus diagnosis (self-diagnosed!), my foot might fall off for her and I’ll never be able to find it in the gobs of lollipops now living in my house. See also: hoarder.

At least I have what appears to be unicorn poo living on my table. Things can always be worse. Even if my foot falls off.