My parents were hippies. You know this. I know this. The guy down the block prolly knows it to, but I’m not asking him because HELLO AWKWARD.

That explanation alone probably explains why they would give me a concoction called, “Coffee, milk, sugar,” starting at age two. I delighted in this drink. I remember sitting at the table, feeling ever-so-grown-up drinking coffee out of a coffee mug JUST LIKE THE OLD PEOPLE DID.

I don’t recall spazzing out and running around like an asshole afterward, but it’s possible.

For Ben’s first Christmas in this house, which had to be (scratches head)(counts on fingers)(stares at wall)(guesses), pushing five, six years ago, I lovingly selected a very tiny coffee mug for him. It was a cheap old thing, but it was so wee and so darling and so motherfucking adorable that I nearly ovulated all over the chick next to me at Crate and Barrel.

I’m not sure what exactly I was thinking he’d do with it. My son, while he is many things, is not an adventurous sort. Milk makes him weep, he doesn’t understand the concept of hot chocolate (until his siblings pointed out how rad it is, I might add). He’s a water-on-the-rocks kinda kid. I respect that.

My daughter, on the other hand, is extremely adventurous.

She also has an obsession with coffee. Normally, she’ll pop up next to me as I’m slurping down the sweet, sweet nectar of the gods, and very coyly ask to dip her binkie in the coffee. If Daver’s not around to bitch at me, I let her. Why the fuck not?* You’re only two once. And coffee? Well, coffee is FOREVER.

So I dragged out that wee, adorable cuppy that I’d bought for Ben so many years ago. I ovulated all over the kitchen as I put a splash of coffee, a heaping amount of sugar, and a liberal amount of milk into it.

And proving once again that she is, in fact, my daughter, she downed that motherfucker.

Then asked for seconds. 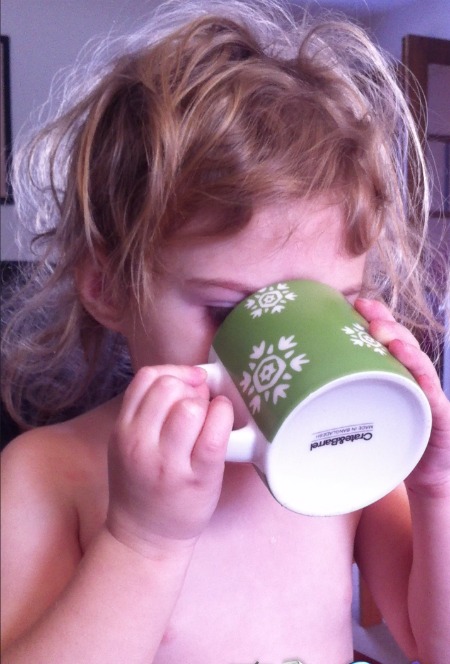 *not actually asking WHY NOT? I’m sure it’s not fabulous for her and frankly? I’m not too worried about a teaspoon of coffee.