Today, as I’m finally remembering my middle name (I think it’s “wants“) and using up what miniscule brain power I have left to decide whether or not I’d like a pony on rollerskates or a unicorn on rollerskates, I am getting ready to show yet another friend what living in Chicago is like.

Namely, my living room. Because I’m re-watching Weeds, dammit, and I have to know what happens next!

(besides the obvious “Nancy will make the worst decision ever“)

Really, it couldn’t be awesomer.

Anyway, this gem appeared in my inbox and I’ve been saving it for a rainy day. Which would be today. It’s ASS outside. HEY, WELCOME TO CHICAGO, IT’S ASS HERE! 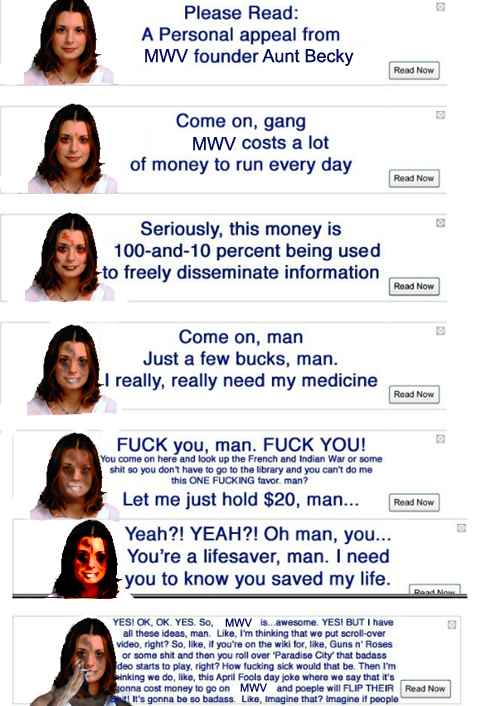 P.S. I think I need to put this on my header somehow. HOW SICK WOULD THAT BE?

Also: Am here and here today.

1) Oh PHEW! I’m relieved to note the chain email has not, in fact, died. How ELSE would I get those spangly angels praying at me?

2) Thank GOD The Facebook warned me about that crazed drug addict sticking needles under the gas pump to infect people with AIDS! I thought he disappeared back in the 90’s when those chain email forwards died off, but you know, I guess he’s back! Thanks, The Facebook!

5) I should really email blast all my friends, asking them to vote for me. They’ll appreciate that.

6) Wow. This is great. So happy that I got tagged in THE WORST picture of me EVER. Now people are asking me if I have a penis. Isn’t that funny?

7) Phew. I’m so glad that The Facebook is trying to kill off blogging.

8 ) Did you know that breast cancer is caused by dioxins* in my water bottles? Because it totally is. The Facebook Said So. The internet NEVER lies.

9) I love logging into to a separate email so I can respond to my Facebook email that’s probably monitored by Mark Zuckerberg. It makes it so much less confusing to have 37 separate email addresses.

10) Oh now THAT’S HILARIOUS. Look, all the girls are posting their BRA color/where there purse is (none and I have no fucking clue) to make the boys think about The Sex! I should play along.

*plastics do not contain dioxins, no matter what that pinhead Sheryl Crow says.

*sobs* WHERE’S TOM FROM MYSPACE? He was EVERYONE’S friend.