I was gently asked – nay, begged, by my friend Rachel to do something “touristy” while she was in town over the weekend. In addition to the tours of the dumpster and other assorted places I’d once gotten wasted, I decided it was probably time to actually bother doing something annoyingly touristy. Like stop in the middle of the sidewalk and stare at the tall buildings while making comments about “these here tall buildings.”

However, staring at buildings is only really fun when you’re wasted and they’re swaying because YOU’RE swaying and then you vomit on the shoes of a businessman wandering past you.

I figured it was time to break from tradition and do something awesome, rather than sitting on my couch, watching dancing cat videos. Also: I was afraid Rachel was going to beat my ass.

So I packed the three of us into the old Family Truckster and navigated our way downtown, while fantasizing about how wicked it would be to have “Slasher” as my license plate rather than some letters and numbers. Because, obviously.

We ended up at the Museum of Science and Industry, which is probably MY happiest place on earth (with exception to the Hardware Store, which always trumps all). Like the auto show and Chinatown, it’s a place I’ve been going since I was a wee lass and somewhere I’m always proud to show off to non-locals.

Of course, we showed up an hour before closing. I’m excellent at timing things, Pranksters. Like I should win a medal at it.

And, as per usual, I immediately dragged them up to the anatomy exhibits, because, well, I’d rather swallow my tongue that hear ANY MORE about earth science.

When I showed up there, looking for the gigantic walk-through heart, I saw that the museum had acquired a number of the exhibits from Body Worlds, that traveling exhibition of preserved human bodies prepared using plastination to preserve the anatomical structures.

If you know my great love for anatomy, you’re probably all, “ZOMG AB, THAT SOUNDS FULL OF THE AWESOME!” And I really, really, really want nothing more than to agree with you. That I love looking at these bodies, so beautifully preserved for all to see. For ALL to fall in love with anatomy as I did so many years ago.

But you’d be wrong.

There’s something, I think, macabre about the whole thing. While I love looking at the circulatory system, so neatly preserved and lifelike, there’s something inherently creepy about seeing a dead guy riding a skateboard. Even if I can see the glorious muscular system in use just as it was when he was alive (presuming, of course, that he’d ever ridden a skateboard before).

I recall the day that my anatomy teacher asked me to help with the dissection of our cadaver. It did not bother me to see someone dead, someone preserved in formalin, or someone who once had hopes, dreams, and loved just as I did. No. What bothered me was that he had a shunt in his left leg left intact from the paramedics attempting to save his life.

It dawned on me, as I was examining the circus-like Body Worlds exhibits, that we who count ourselves among the living simply do not want to think of our dead as like us.

It brings it all too close to home, I think.

And while I learned many fascinating tidbits while at the MSI – my liver, for example, is a mere three years old – I walked out of there ruminating about the freakish sideshow of Body Worlds.

My hope is that the Body Worlds exhibits inspire a young crop of anatomists much like I was inspired, as a wee tot, by the mere pictures of the body from an old copy of Grey’s Anatomy.

Otherwise, we’re going to have some seriously fucked up serial killers out there. 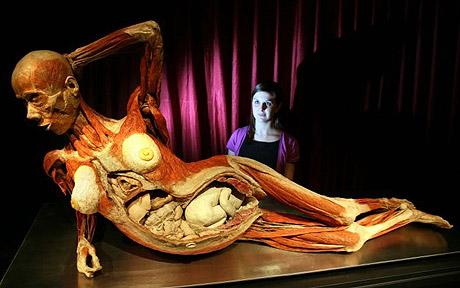