I’ve been blogging since dinosaurs ruled the earth, and this is what I’ve learned about blogging over the years. As always, take what you need and leave the rest. 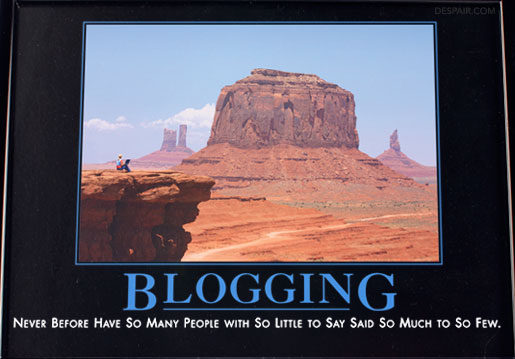 Most blogs have about a one year shelf life, which is always sad to see, especially once you’ve really gotten to know a blogger.

There is such a thing as over-posting, but I’m unclear as to what that is.

Blogging takes a ton of work. Really, it does.

Proof-read your posts religiously and make liberal use of spell check.

Go back into your archives and reedit old posts – it may feel like a waste of time, but it’s always nice to know you’re constantly working on improving. Besides, editing is a great way to help you be a better writer.

No one likes a Grammar Nazi in the comments, so back off.

The trolls will come and they do not read most of what you say before they chew you out in the comments.

It’s really up to you whether or not you allow the trolls to have their say on your blog. I tend to allow the comments through, but I have a feeling my spam filter catches the trolls.

You don’t have to allow anyone to trash you on your blog. If they don’t like you, that’s really there problem.

Protect your readers from attacks from others.

No one will read a new blog for a couple months. It’s okay. Soldier on. Use the time to hone what you’re doing, and make your blog even better.

If you want people to read you, read other people.

While you’re reading other people, why not make some friends while you’re at it?

Use a full RSS feed in the reader because a partial feed makes a lot of people unsubscribe. Many people read posts in a reader at work where many blogs are blocked.

You may be 1000% certain that you are The New Dooce, but you’re not. Now, you might be as talented as fucking Hemingway, but you’re not going to get the same press that she did. No press = no instant popularity.

Find your own writing style and realize that no matter what you’re blogging about, someone else has probably already done it. That’s okay – try not to get too hung up on “copycats.”

Try to keep your audience in mind when you’re writing because it will help you to focus your post into a more coherent whole, but don’t censor yourself to try and please everyone. You can’t. It’s simply not possible.

There’s more politics than you can imagine in blogging. Try your best not to get wrapped up in it (which, I promise, is easier said than done).

If you want more comments then comment until your fingers bleed.

Begging for comments is distasteful.

Nothing – not even the “official” de-lurking day – will coax 97.2% of your readers to comment.

Support each other as best as you can, in good times and in bad. Every comment helps.

Every couple of weeks, some new trend will piss off a number of (especially) mom bloggers and they will become annoyingly polarized.

Resist the urge to chime in about Your Take On This Trend. Seriously.

Every time the Today show features Dooce, there’s a bazillion start up blogs that believe (hehe) that you can $40,000 a month blogging. Maybe if you’re Dooce that’s true, but for the rest of us? Bwahahahahaha! I don’t mean to sound mean, and if you do manage this, pat yourself on your back for me but don’t get your hopes up.

Whenever one of those stupid blog contests gets started, everyone freaks out. It will blow over.

If you’re totally blocked for ideas about a post, describing the boring minutiae of your day is probably not titillating to others. Write it if you must, then delete it. Hopefully that will get your juices flowing and you can write about something more interesting. A turd of a post will always look like a turd no matter how you dress it up.

Talking shit about other people – especially when very thinly veiled – is a bad fucking idea. Password protect those, or better yet, don’t write them at all. Although they may be satisfying, remember, those are the posts that the very same people you talk about may find.

It’s a smaller Internet than you think it is and you’re not as anonymous as you think you are.

Not everyone will agree with you and there are people who will happily tell all of the ways you are wrong. You don’t have to like it, but if you put it out there, you do have to deal with it.

There is something about being able to hide behind “anonymous” that makes people say really dick-ish things that they probably wouldn’t say to your face. It can hurt, I know this, and people will get you all wrong and it will suck, but if you don’t want to deal with it, go private or password protected.
Your feelings will get hurt. I promise you this.

Don’t allow yourself to dwell on the trolls. While it’s very easy to focus on the negative, these people aren’t worth your time.

When you figure this out, let me know how.

Although most of your followers will wish you well, there will always, ALWAYS be a contingent that hopes that you will fail. And fail badly.

Sarcasm doesn’t always translate well through the written word, so be careful when you use it.

Music on blogs is (almos) universally hated. If you want to put it on there, it’s wise to leave the playlist on mute and allow other people to turn it on should they want.

Word verification systems will cause you to lose comments because it’s often very hard and very confusing to use.

A nice clean uncluttered background is preferable to something that makes it hard to focus on the content.

If you write long posts, use larger, not smaller, fonts.

Don’t put shit on the Internet you wouldn’t wear on a tee-shirt.

Beware of the donate button. It (oddly) causes many people to be very, very mad.

Meme’s, although a nice tool to get the writing juices flowing, are usually boring to read. If you like doing ’em, then fuck it and do ’em anyway.

Edit your posts. Edit them religiously.

Paragraph breaks are a necessity. It’s really hard on the eyes to read anything not broken up by small paragraphs.

The background of your post needs to be something that is appealing to the eyes. Some colors (especially pink, which is a favorite color of mine) although lovely, leave the reader squinty and headachey. Check out what your finished post looks like YOURSELF and see if you can read it without adjusting your monitor.

A black background is very, very hard to read.

If all your tweets on Twitter are links to stuff that people can buy from you or ways to get a zillion followers overnight, you’ve probably pissed off a good portion of your readers.

There is such a thing as over-sharing.

Stuff on the Internet – even the stuff you delete – is never, ever, EVER gone. EVER. So make DAMN sure you want to live with whatever you say.

Remember that your kids may one day read whatever you’ve written, so choose what you share (especially about them) well.

Don’t idolize the success of another blogger. Also, don’t hate them for it. In blogging, you often get what you put into it. And the higher you climb, the more pressure there is.

Be kind to other people. You gain nothing by being cruel.

The success of your blog should be determined by how you feel about your blog, not the number of comments or followers, because ultimately you are blogging for you.

Blog for yourself, not for other people.

Remember, it’s all supposed to be fun. Enjoy what you write, take pride in it, and if someone else comes along and tells you that you suck, tell them that Your Aunt Becky will tell them to shove it up their puckered pooper.

73 thoughts on “Blogging For Dummies”