When I was a preteen, I was convinced that my parents were inhumanely inhumane because they were so cheap that they wouldn’t spring the extra two bucks a month for call waiting. For someone who lived with the phone glued to the side of her head, this was a BIG DEAL INDEED. What if I missed a Very Important Phone Call? I mean, someone could have seen someone pass a note in class and if I missed it, I might diiiieeeeee!

Oh, like you weren’t dramatic as a thirteen year old.

It wasn’t until later that I wore them down and they got cable TV, either, so I was stuck watching the crappy network channels. Oddly, I became sort of enthralled by infomercials. They were like their own little comedy goldmine all rolled up into a neat 30 minute package.

The announcers–pre-Billy Mays, whom, you should know, I mourned heavily–bounded from one side of the room to the other, all convinced of the merit of a product that even I knew was probably bullshitty garbage. And yet! And how! But wait! There’s more!

When I decided that 2010 was the year that I needed to bring Aunt Becky back from under the pile of dirty diapers and Lego bits, one of the first things that I did was to get a piece of exercise equipment. I love the gym like it was my job, but getting to the gym is about as easy as teaching my cat to use the microwave, so I figured I should bring the gym here.

I was going to LEARN from the mistakes of my friends! And my parents! I wasn’t going to drop thousands of dollars on a nice piece of equipment that would sit there, gathering dust and laundry.

I’d remembered seeing a small, fold up elliptical machine at The Sharper Image a couple of years ago for a couple hundred bucks. Which? If you’re going to buy something that’s not going to be used very often, why not go cheap and portable?

Well, turns out Sharper Image doesn’t make it any longer.

An Amazon search brought me to something even cheaper. I didn’t recognize the name, but I didn’t give a shit. For $80 plus free shipping (order now and you’ll get bonus good reviews!!) it doesn’t exactly have to scream out “I LOVE YOU AUNT BECKY!”

Universally, I got this response when I told people what TYPE of elliptical I got, “Bwahahahaha!” Exercise equipment does many things to me, but it doesn’t normally make me LAUGH, so I had to investigate.

Turns out that I bought a piece of exercise equipment from this douche: 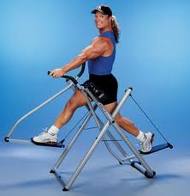 This would be Mr. Tony Little. He sells The Gazelle. And he’s a DILL-BAG!

The unfortunate side-effect is that now I will be unable to stop thinking of Tony Little as I exercise now. He’ll be right beside me, his stupid flouncy pony tail flopping up and down while he yells, “Show me those big old pecs!”

I knew I should have stuck with Jillian Michaels and her 30 Day Shred.