You were born, January 28, 2009, amid the whirring and clicking of the NICU team, over my frantic wails, and my doctor’s shouts of “GET THE NICU IN HERE STAT,” a whopper of a baby. Your rolls had rolls, making you look like a mini Stay Puft Marshmallow Baby. I longed, from my place on the bed where I lay weeping, to examine every one of those rolls. There’s nothing I love more than a brand new roly-poly, chubby cheeked, shit machine. 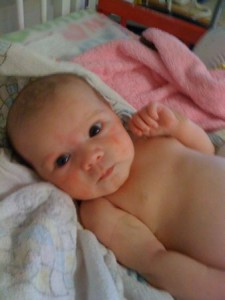 But it wasn’t so simple, was it?

Amelia, you were born with a defect on your head. Right after you were born, it seemed as though it was probably a cosmetic issue, a benign cyst upon your wee head. The alternative, I knew from years of medical and nursing training, was a big. fucking. deal. indeed.

Guess which one you had?

My daughter, you are always the overachiever.

We had about twelve hours between birth and diagnosis in which we feverishly hoped that it was a boring cyst – your daddy and I and your Internet Aunts and Uncles hoped and prayed that you would be okay. It was only after your first CT Scan (I have to note that there is NO heading in your baby book for “Baby’s First CT Scan” which makes me think those baby book people have it ALL WRONG)(Okay, you don’t have a baby book. I really WISH you did, but you don’t)(sorry kiddo) that we learned that you were more of an overachiever than your mother.

It took hours to talk to a doctor that day, but when we did, the news wasn’t good. You’d already been ripped away from me and whisked off to the NICU, leaving your daddy and I to howl in sadness in our now-empty room. Your dad had tracked down your neurologist and was told that you had a neural tube defect. An encephalocele. You would need major neurosurgery and soon.

Amelia, why did you have to be such an overachiever?

It was there in the NICU that you were given your middle name – Grace. For you, in the face of all this adversity, showed me what grace looked like. Your father, he named you there. 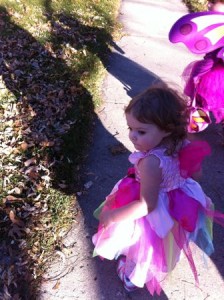 The diagnosis left the future full of question marks (and you with a scar that neatly bisects the back of your head). Would you be normal? Would you survive? Would you learn as your brothers had?

The answer has always been a resounding *shrugs*

See most kids, my tiny overachiever, who have neural tube defects in the location that you did, do not survive. Most die before or after birth. Such a small handful of children with posterior encephaloceles survive that there is almost no data about them.

You are not only a million dollar baby, but a one in a million child. 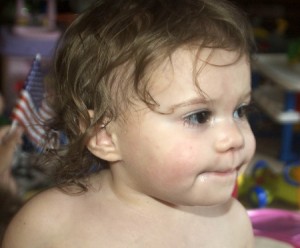 For you are easily the smartest of my three very smart children. The connections you make between things. The way you understand concepts that puzzle most adults, that is nothing short of a miracle.

You are nothing short of a miracle.

In your short years, Amelia, you have done more good than any three-year old should be capable of. While your birth shattered me, you’ve helped assemble me back into a new person; a better person. You have given hope to people who have never met you, hope for parents whose children have the very same diagnosis – encephalocele – that you do. 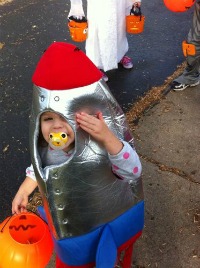 You are the sole reason that Band Back Together exists. Through The Band, you have saved lives – actual lives.

That is nothing short of a miracle. 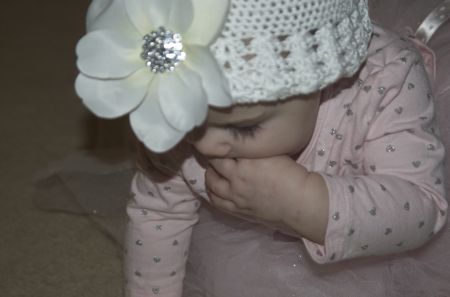 So to you, on the day before your third birthday, my darling girl, I want to thank you. For all you have given me. For the light you’ve bestowed upon the world, and your light – a light that continues to shine.

83 thoughts on “And Now You Are Three”