Dexter, remember just this past winter, when I had the swine flu and you helped me make cupcakes? That was probably one of the most romantic things anyone has ever done for me in years. Except okay, there was that guy who helped me put my groceries in my cart AND THEN HE HELD THE DOOR OPEN FOR ME because motherfucking chivalry isn’t DEAD.

Sure, okay you’re a vigilante serial killer and I like the IDEA of killing people and “serial” is ALMOST like “cereal” and I could write massive tomes about my love of cereal. And maybe I am too cheap to have gotten Showtime to watch your forth season, but know that I tweeted ANGRILY at the stupid fucking New York Times Blogger who insulted your hat.

And you, Dr. House, your Vicodin-popping ways made me fall in love with you every Monday night. PLUS, I use your show as a way to use my medical knowledge to feel smugly superior to upwards of two toddlers and a host of houseplants. I am often way ahead of your team when I diagnose your patient for you. (P.S. It’s never lupus or perineoplastic syndrome)(except when it is)(that, my friends, is medicine for you) and then I feel very lofty and important.

Mr. Bourdain, while you can say words like “pube” on national television and are snarky enough to make my girl bits jiggle with glee, I have a feeling you’d take my steady diet of Uncrustables and Diet Coke personally. But call me, we can can wear matching BFF necklaces because I sort of want to follow you around everywhere you go and see if you really are always that awesome. If you are, I’m going to admit that I’ll be VERY jealous.

THEN, I might have to sic Dexter on you. 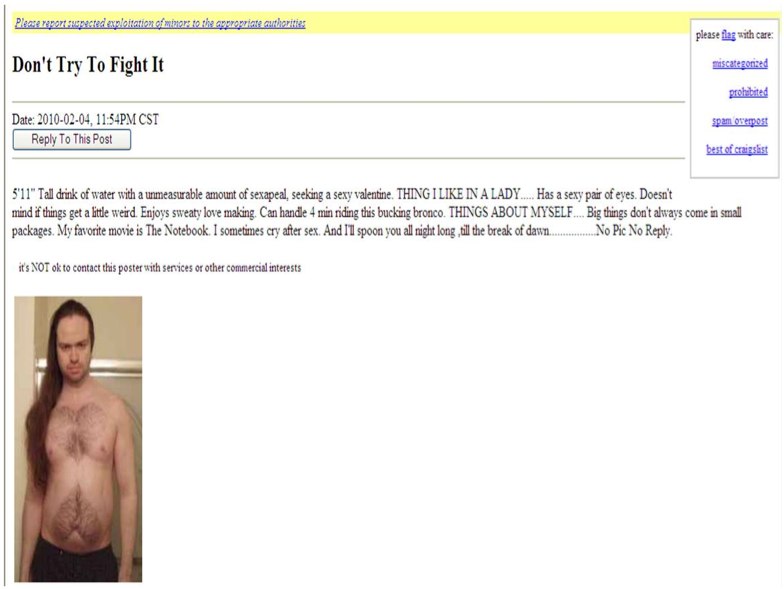 (please click to enlarge. But don’t get any ideas. He’s mine)

Now, see, he KNOWS that I won’t mind if things get a little weird, because with me they’re ALWAYS a little weird. I mean, I’m AUNT BECKY, bitch! And while I normally can only handle 3.5 minutes on a bucking bronco, baby, for you, I’ll hold out for four.

I’ve never cried after sex, baby, unless it was really bad, but I’m planning to collect your tears and weave them into a throw rug. We can lay on it while we watch The Notebook. Then I will run my hands through your heart-shaped chest hair and thank GOD we’re together.

I CAN’T FIGHT THIS FEELING ANY LONGER, so I won’t even try.

But since you posted this in February and according to my faulty mathematics it’s been like a year or three, I am afraid some other vixen may have snatched you up. You’re clearly a catch that no woman could pass up. So I am posting my OWN Craig’s List ad. 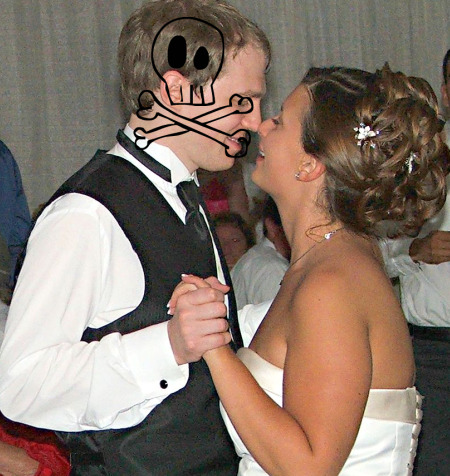 Are You The Cheese To My Macaroni? Wait, That Came Out Wrong.

THINGS I LIKE IN A MAN…Not a sex offender and can preferably recite the entire opening monologue from Men In Black II. Enjoys frying bacon naked. Can handle upwards of 6-12 hours talking about my feelings and what they mean to you.

THINGS I LIKE ABOUT MYSELF…I dislike talking about my feelings, bacon and Men In Black II. I enjoy lustily holding hands, abusing prescription narcotics and giving blue balls. If you ever talk about cuddling, I will punch you in the throat….No pic, no reply. Also, shaved balls are a must.

I’m pretty sure the replies will be rolling in.

*at the risk of making me sound like a hugemongous slutbag who puts out for her fake television husbands.

67 thoughts on “An Open Letter To My Television Husbands”