While anyone who’s read my blog for longer than five minutes knows that I wear a YOU’RE NUMBER ONE finger for Christmas, there’s one party of this happy-crappy, shooting glitter out of your ass holiday I loathe. 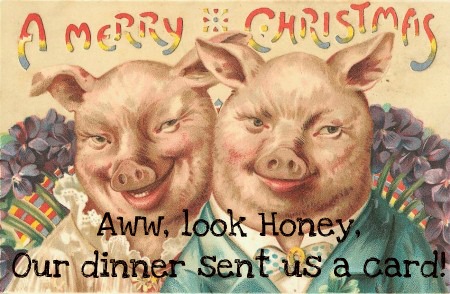 A lifetime ago, I’d been all, “Someday” *shakes fists at sky* “SOMEDAY I will hire someone to wrap presents for me and they’ll be beautiful and angels will burst into my living room singing the Seventh Heaven theme song.” Then I shook my fist for even more dramatic effect, even though I was alone in the house.

We all know what’s happened throughout the past year, and most days I’m pleased to have toilet paper. Apparently the Universe not only laughed at my marriage, but at my long-held desire to have Christmas presents wrapped by someone who actually has thumbs and the patience for all those bows and shit.

See, the thing is, Pranksters, I have a complex (stop gasping at the computer, I know how shocking this is for you) about gift-wrapping. I can blame it on one person; one single individual, who ruined Christmas wrapping forever.

(And no, it’s not Pinterest, which is also responsible for making me feel like an ass for not taking beautiful pictures of gilded fish you can make in four easy steps with common household ingredients because I’M NOT MOTHERFUCKING CRAFTY, PINTEREST, SO SHUT THE FUCK UP ALREADY).

Many, many years ago, my brother was married to a woman who I hated, and not just because we shared the same name, although I’ll admit that I *did* get sick of people calling me to speak to her, mostly because she was a raging asshole and mostly because I was a teenager. Two mostly’s make a whole, right?

My brother married someone who took not only my name, MY name, but also any shreds of dignity I had about the presents I’d hastily bought at Walgreens on Christmas Eve (we all know my mother LOVED the “Happy Birthday Grandson” figurine I’d bought her!), then wrapped in a mere ten minutes with paper I’d taken from my parents. They weren’t pretty packages, and while I’m dead certain everyone enjoyed (read: threw away) the candy canes filled with assorted jellies (lies), I was pretty proud of myself for being all last minute and thoughtful and shit.

(“thoughtful” here meaning “fuck, it’s already Christmas. I should probably buy all the peeing dolls I can find at Walgreens – people love those things! Especially adults because PEEING BABIES = AWESOMELY THOUGHTFUL and not at ALL POINTLESS!!)

While my packages were often wrapped in plastic drug store bags, proudly displaying not only WHERE the presents came from, but also REUSING which is part of the recycling tree or food pyramid or something (I don’t know. I was always the one in the back of the class playing Bejeweled on my phone all thug-life style), she and my brother, who then lived across town, would waltz into my parents house on Christmas Day with bags of carefully wrapped presents.

They’d place them neatly under the tree, effectively ensuring that mine now appeared to have been wrapped in burlap sacks and smeared with dog poo. She’d go all the fuck out for that shit. I’m talking $15 A SHEET wrapping paper, bows that were folded in such a fashion that even Martha Stewart would’ve been envious of – before she stole the idea and then sold it for a zillion dollars at that craft store of hers. Each package had a neatly inscribed label, probably embossed or some shit, and she even managed to get the wrapping paper to line up at the back of the package so that it looked like one fluid piece. Along with the monogrammed tags imported from Paris or one of those third world countries where child labor laws go something like, “you have arms? YOU HAVE THE JOB!” she’d always add a little extra something. A trinket or doo-dad or whoodilly or whatever.

When it came time to open her carefully wrapped presents, she’d always manage to find a thoughtful – yet tasteful – gift for each of us, but I always hated destroying what must’ve taken her hours to do. I cannot imagine how much time she’d spent on each gift, but damn, despite our “differences” that girl could motherfucking wrap. It didn’t help that it seemed to cause her excruciating pain to watch people open her gifts, which I could totally understand.

Years later, I still think of her each time I go to wrap presents because even when I try HARD to make a present look purdy, it still winds up looking as though an infant had done it. My edges don’t match. Nothing is ever straight. My bows aren’t hand-crafted with tears from Unicorns and ribbons made of Pegasus hair, they’re usually straight from the bulk bag of bows – always mangled and misshapen – I’d found at an after-Christmas sale the year prior because I’m a cheap ass who balks at paying more than two bucks a roll for wrapping paper.

I’d been intensely proud of myself for getting my gift-buying done before Christmas Eve. I’d begun trying to pat myself on the back until I got distracted when I learned that you really can’t lick your elbow, and then the packages began to arrive. And when they did, I realized I hadn’t done myself any favors. 650 square feet = no one has any secrets.

Off to Dave’s I trotted to collect some of the wrapping materials I’d bought in years past, having every intention of getting them wrapped and under my ridiculous tree before, well, Christmas. It’s going to be a hard Christmas, of that I have no doubt, and I wanted to make sure the kids didn’t remember this as “the Christmas That Sucked Balls,” because while it’s going to be hard for me, I’d rather spare them the pain.

I’ve been eying the packages, wrapping paper, and tape (that my Prankster Jolie sent me as a gift, along with an ornament for my tree, which is just awesome. The ornament, not the tree. The tree was manufactured by Satan) every day, all, “IMMA DO THIS SHIT” until I get down to it and realize that no matter how pretty the paper, no matter how nice the bows, I still loathe wrapping presents.

I’ve set my sights a lot lower than the whole I WILL SOMEDAY HIRE SOMEONE TO WRAP FOR ME RATHER THAN BRIBING MY MOTHER TO DO IT because, well, that seems prudent. Plus, that’s a huge waste of money.

This year, I’m simply hoping my presents don’t appear to have been wrapped by a blind squirrel without thumbs.

But, because I know me, I’m not holding my breath.

What about you, Pranksters? What’s the one thing about the holidays that makes you crazy (besides everything)(and if you say Christmas music, I will cut you because I LOVE that shit)?

33 thoughts on “All Wrapped Up And Nowhere To Go”