Did you know that the original title of “Where The Red Fern Grows” was “A Boy and His Dog?” Now you do. I don’t know why I can regurgitate that particular bit of information and barely remember my middle name. Is it Sherrick or is it Elizabeth? I DON’T REMEMBER, Pranksters!

Anyway, the editors must have thought that the the original title lacked some pizazz, so they insisted it be changed to something more artsy. I don’t know shit about artsy, but the first title has a little something, but so does the second.

And: SPOILER ALERT: (the dog dies and it’s tremendously sad).

Anyway, yesterday, we were at The Target, otherwise known as MY boyfriend–he’s sleeping around on you, ladies–and I realized that I probably required some new kicky flippity-flops to take on my cruise. I mean, how else can I attract an older man and become a trophy wife like I’ve always wanted, but without a new pair of kicks?

Just don’t remind me that I’m not trophy wife material anymore because you’re CRUSHING my DREAMS, MAN. And that’s SO not cool.

So I picked out these hideous monstrosities that were later called, “like being fucked in the eye.” I thought they were rather charming.

First, my Gerber Daisy shoes (because, Pranksters, you should ALWAYS, as Alex would tell you, refer to a flower by it’s NAME, not simply as “flower” if you know the name): 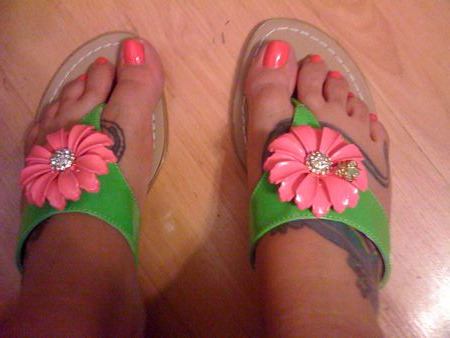 I thought those screamed Aunt Becky lives here and has a wicked sense of fashion.

Next up were my more nautically themed shoes: 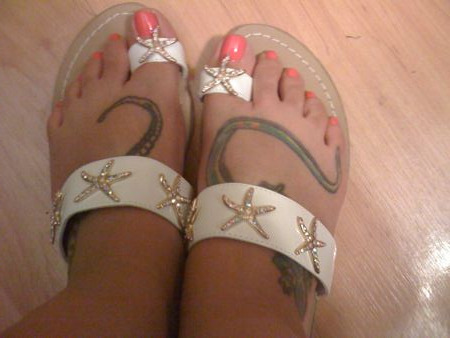 I do NOT believe that anyone at the nursing home would wear these charming shoes, despite what I was told…

…they have no firm arch support. OBVS.

We continued on in the shoe aisle where I was looking for more Garden Boots (it’s a proper noun in my house) for Alex when we happened upon the GIRLS shoe aisle. Since you Pranksters informed me that there was some nifty conversion between adult womens shoes and girls shoes, my shoe collection has increased exponentially, while the maturity level of it has dropped.

I’ve dropped a considerable sum on shoes for my daughter, who happened to be in the cart with me, throwing animal crackers at my head, but unless I planned to duct tape her feet into her shoes, there was no way she was going to wear them. She just…refused.

Amelia, it seems, is a force to be reckoned with. And, for someone who has been through all of the obstacles that she has, I’m really not going to sweat the small stuff. If the girl doesn’t want to wear some motherfucking shoes, well, FINE. There will be a day when she does, and I will REGRET it when I see what the shoes she picks out cost.

But, rather than continue assaulting me with animal crackers, my daughter did an odd thing. She began to squirm and shriek and indicate that she, would, Mom, you ignorant slut, like to look at those MOTHERFUCKING SHOES.

Baffled, I handed them to her. She indicated that she wanted me to place those shoes on her feet. So I did, but they didn’t match up to whatever it was that she thought in her head, so she shook her head “no.” (she’s not speaking much)(I know, I KNOW, I’m not happy either).

She’d then indicate that she’d like THAT pair of shoes, and I’d place THEM onto her feet. Again, she’d decide that they didn’t pass her elaborate standards and no, they’d too go back onto the shelf. For thirty minutes, we did this.

Finally, she spied these: 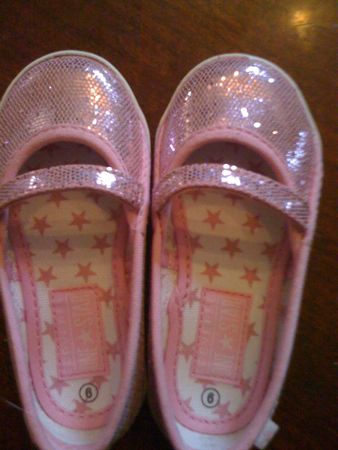 And by this time, I was pretty much fed up with looking for shoes and ready to go home. So I said, “Amelia, really?” 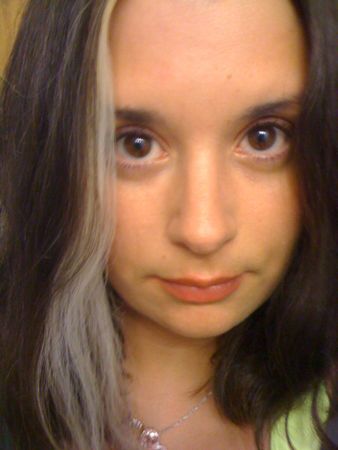 And she took one look at my incredulous face and said, 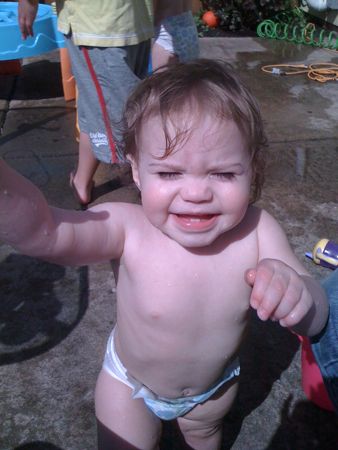 And so I dutifully strapped her sausage/marshmallow feet into the shoes and then? She lit up like a wee fireplug/Christmas tree. Turns out, the girl was just waiting for some Chuck T’s.

I’d only be more proud if they were Vans.

65 thoughts on “A Girl and Her Shoes”