Reach for the stars, kid. Just don’t be surprised if they don’t reach back.

I woke up on Saturday to the whining of two very small, very bored short people. I hadn’t been up for twenty minutes before Amelia was asking to go to the store to buy some Hello Kitty shirts and Alex was grumbling about the solar system he’d constructed out of tennis balls.

Blearily, I suggested we go to the green house – Alex’s favorite hotspot – a prospect that was met with hoots, hollers and elated screams as the two small people struggled to dress themselves.

We spent an hour there before I had to drag them away from the koi ponds and those gazing balls (which they call “planets.”). They were both fairly indignant and I wasn’t quite ready to take them home, so I suggested that we go to the animal shelter to look at cats.

I’m big into shelter animals. Especially the type that aren’t normally adopted. I try to go for the one animal in the whole joint that looks as though no one will ever adopt it (see also: my one-eyed cat named Ophelia; may she rest in peace).

My (NON-SPONSORED) PSA for the day: did you know black cats are less likely to be adopted? Anderson Animal Shelter, where we adopted our cats, was teeming with them. Apparently people still think they’re bad luck. I say, shut your whore mouth and adopt some black cats.

(I nearly named Alex “Cash,” if that tells you anything.)

We used to foster cats, well before The World’s Crankiest Baby was born, and it turns out that naming cats isn’t all that easy. Our last foster cat, I named “Little Cat” because she was both “little” and a “cat.” I wanted her adopted just so she could be saved from the hell of living as “Little Cat” for the rest of her long life.

The first cat was easy to name. Her shelter name was “Cassie” which is a fine name for a cat, although I immediately called her “Chloe” because I can’t remember names to save my own ass. So Chloe it is.

The second cat, a portly black domestic medium hair, has proved to be trickier. In fact, it’s been so tricky for me to replace his given name, “Kendell,” that I’ve been calling him “Basement Kitty.” Because he hangs in the basement, natch.

You know how you just KNOW when something is right? Well, none of those are.

In the meantime, I’ll keep calling poor Basement Kitty, “Basement Kitty,” until something better comes along. For his sake, I hope it does soon. 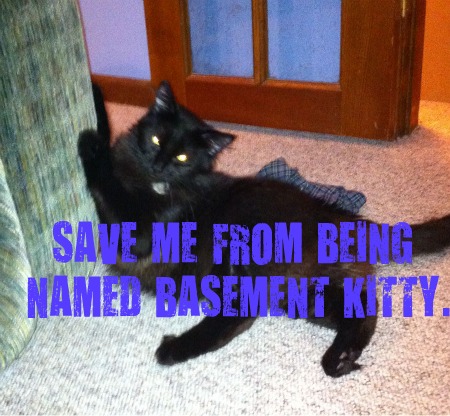 What should I name my blurry cat, Pranksters? HALP ME.

160 thoughts on “A Basement Kitty By Any Other Name.”