After getting some shit for writing about how uncomfortable I was in my skin when I was heavier, I’m not sure how I’m supposed to talk about weight, so let me preface all of what I say with this: I write satire and I also write from the heart. I do not, have not, and never will care about what anyone else does, weighs or looks like. I am not about to attack anyone for their weight because your weight does not matter to me (Aunt Becky loves you as you are) and I never have attacked someone on or offline for it.

In the LONG GONE days when I was skinny, I always had a bit of a pot belly. While the chick in Pulp Fiction thought they were cute, I counted down the years until I could have a tummy tuck. I think everyone has that feature they dislike tremendously about themselves. My stomach was mine.

The pooch got worse after I gained and lost 60-70 pounds three times (thanks, crotch parasites), most of the weight in my torso, and by the time I’d gotten down to the weight I was three weeks ago, (sixteen pounds away from my high school weight), I probably could have worn the excess skin as a handy scarf. It was a matter of when I’d get the skin lopped off and when always fell into the nebulous future along with “achieving total world domination” and “learning to make jello.” I figured I’d get to it when I’d get to it.

When I did end up in the plastic surgeon’s office to discuss a possible breast reduction, I’d made the appointment to discuss a tummy tuck as well. Figured I’d at least DISCUSS it with the guy while I was in there…right?

The breast reduction, he said, was probably going to leave me unhappy. Especially because according to the weird insurance criteria, it wouldn’t be covered, at least (according to you Pranksters) not without some major legwork. He said I’d probably want an augmentation with some reduction and other things I can’t remember and I trusted that coming from him.

The tummy tuck, I learned, could fix some of my abdominal muscles, something that had been long busted since I’d gotten pregnant with my first. Plus, it was going to fix something else I’d hated: my pooch.

Medicine is, after all, an imprecise science.

We all know that I signed up for a full abdominoplasty and had one three weeks ago tomorrow.

I paid out of pocket. Entirely. (for all of you who asked)

The full abdominoplasty differs from the mini-abdominoplasty in that it deals with tightening the muscles underneath. In my case, he repaired a diastasis recti (separation between the left and right side of the rectus abdominis muscle, which covers the front surface of the belly area.). A full abdominoplasty is also a more major surgery.

The surgeon thought that he could remove 2-3 pounds from my abdominal area. He removed 6 and fixed my abdominal muscles.

Not going to lie. The recovery has sucked far harder than I’d thought it would. I’m sawed more than in half. I’m in pain most of the time. I have to wear a delicious (read: hideous) binder all of the time, too (which reminds me, I need to buy a new one. I’m thinking that I’ll buy a Spanx or a Yummy Tummy rather than a medical one. Which do you recommend?).

As one of my Pranksters said, it does get better every day. And the results are amazing. My headaches are better. I’m swollen, but every day, I’m a little less so.

I’m happy that I did it.

I don’t have a before picture of my pooch before my operation. If I go up on the doc’s website, I’ll show you, but I didn’t take one. I was too embarrassed.

Instead, I can give you this: 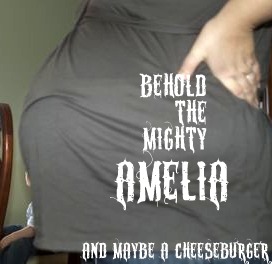 It’s the only shot I have of me while pregnant.

Now, for the dramatic reveal. Please excuse the lighting in my bathroom. I am not orange. I swear. 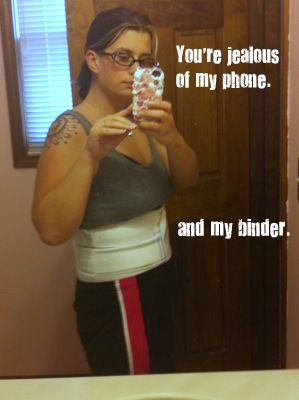 I know you want my binder. AND my phone.

And here’s the dramatic NO BINDER reveal*

The lines you’re seeing are mostly from laying on the binder. And yes, I am a little swollen.

My stomach, Pranksters, even swollen, has NEVER been so flat. EVER.

This totally beats a pair of boobs.

*I’ll take another picture next week BEFORE I get cast onto Baywatch**.

**Is that show even on anymore?