I have been a mother for ten years now.

That number – a third of my lifetime – seems to be so much larger, more significant than it was last year. Ten years is a long time.

I fell into motherhood the same way I’ve fallen into every other major thing in my life: accidentally. I’d never given much thought to motherhood, parenting or having crotch parasites of my very own. I don’t have younger siblings or younger cousins, and the kids I babysat weren’t ever babies. If you’d asked me back then if I’d wanted to have babies, I probably would have said a resounding, “Fuck.” and “No.”

To be unexpectedly a parent was the most shocking thing that’s happened to me. If I hadn’t gotten pregnant against the odds, I can’t say that I’m certain I’d have ever walked down that road. I can’t say that, of course, because I’ve never been an adult without having a bouncing baby (of my very own)(I am not a baby-napper) strapped into my car, tooling along with me. I cannot imagine my life without children.

I’ve said many times that without Ben, I would be nothing, and that’s the truth. Every decision I’ve made in the last ten years has been executed while thinking of the betterment of another. Would I be nothing without him? No. Of course not. But I certainly wouldn’t have gotten married, had two more crotch parasites or become Your Aunt Becky.

I do not know where I’d be without him.

It’s been an unglamorous life, that’s for sure, but one filled with laughter and heartache, joy and sorrow, and mostly, the unexpected.

I wouldn’t have it any other way. 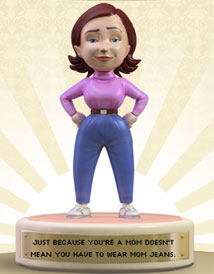 We’re doing a carnival of Mother’s Day posts from many different perspectives on Band Back Together if you’d like to join us.