1) Christian Slater never ages. Luckily, through the use of Photoshop, neither do I!* 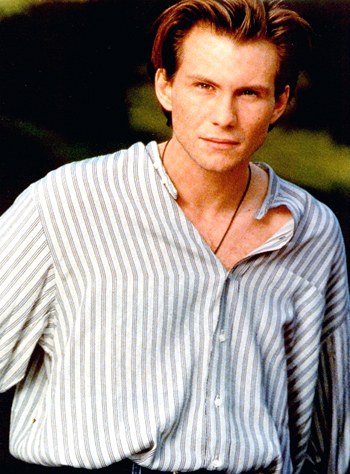 2) Starring in non-corny 80’s cult classics ensures that people like me cut their proverbial teeth on phrases like, “Talk Hard,” and “Chaos was what killed the dinosaurs, darling.”

3) If I were Christian Slater, it wouldn’t be creepy to have a crush on myself.

4) I could try and board a commercial airline with a gun in my bag and not have it be “potential terrorist,” but “quirky.”

6) I could’ve been BFF with River Phoenix, my first television boyfriend from ages 6-13.

7) I could claim to have a “baboon heart,” and then die in the arms of my longtime love. Mostly, I just want to claim that I have a baboon heart, although I might call it “bonobo,” because it sounds cooler.

9) My sneering voice would allow you to impersonate Jack Nicholson over the phone, which increases not just my ability to get on radio shows, but also my credit line, as he’s got platinum EVERYTHING.

10) I could get Nerd Cred with a cameo role in Star Trek VI – which would mean that all nerds would listen to me. Forever (and we all know how much I heart nerds).

21 thoughts on “10 Reasons I Wish I Were Christian Slater”