I’m always amazed when my kids do something clever. It’s not that I don’t think they’re smart…okay maybe it is. But I don’t really think any kids are smart. Shit, I wasn’t smart as a kid. Unless you call eating an entire tub of frosting with my tongue smart, which you cannot unless you’re a lying liar who lies.

People who are all “my kid is a fucking GENIUS!” make me sort of itchy because it’s very clear that they’re annoying.

So when mine do things that are reasonably smart, I’m all “who the hell ARE you short people?”

But my middle son, the one that I’ve pegged to be a mini-Chris Farley at the ripe age of 2, because he routinely runs into walls on purpose so that he can fall down, only to spring back up and yell “I’M OKAY!!” he appears to have developed some odd habits.

In the past month or so, he’s developed an obsession with two things. Two weird, maybe related, but nonetheless, strange things. Perhaps all of the jumping off the couch onto his head has jangled something loose. Because he now is infatuated with:

B) The Andromeda Galaxy

This is the second of my children to take a more than passing interest in the planets (my first son could, by Alex’s age, name all 63 of Jupiter’s moons), and before you think that I’m somehow indoctrinating them with my own adoration of cosmology, let me assure you that I am not THAT kind of scientist. I’m a virus kinda girl, myself.

Ben has since grown out of his love of the planets and Alex has fallen headfirst in love all on his own. It’s beyond weird.

So watch out, Carl Sagan. Alex Harks is coming for you.

Just as soon as he gets his diaper changed. 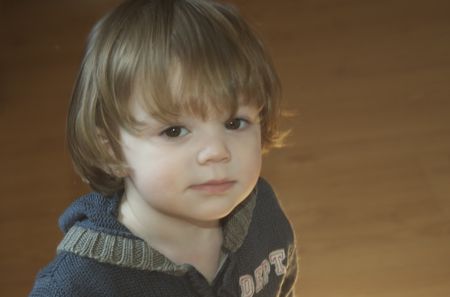